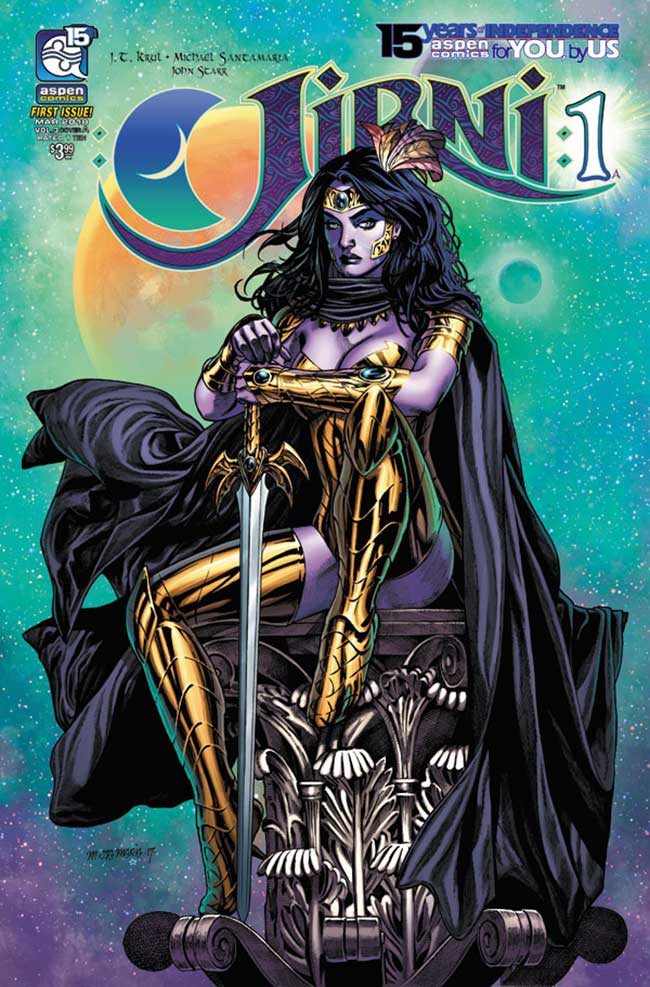 New readers and fans alike can find everything they need to know about Jirni in this debut Jirni Primer issue! Return to the epic quest within volumes one and two, never-before-seen commentary, art and creator secrets…All for only a quarter! These Aspen Anniversary edition primer issues are the perfect compliment to discover more about Aspen’s upcoming slate of new and returning titles! As Ara’s quest to find her kidnapped mother continues, she finds solace in a remote village, but do they have their own demons to worry about? Meanwhile, Torinthal continues on his own search to unlock the mysteries of the D’jinn and their celestial origin. Don’t miss out on the biggest quest for Ara yet! The world of Jirni launches into uncharted territory as Ara’s epic story continues!

Ara has returned and has left more than her homeland behind, as her journey takes her to sea long with Boro and his band of pirates. However, what great and terrible secrets—and danger—await Ara in the distant horizon during her search for her mother? Will she be able to survive the experience? Prepare to experience a tale of fantasy and wonder without boundaries!

Created and written by J.T. Krul (All New Soulfire, Fathom, Teen Titans, Green Arrow), with pencils by V. Ken Marion (All New Soulfire, Green Lantern Corps), this second volume of the smash hit series will show you and amazing new world of excitement and adventure! Including a complete cover gallery and a whole lot more, this second Jirni trade paperback is not to be missed! Watch what you think!

In the hopes of developing the ultimate wiretapping system against the War on Terror, the CIA has reached into their own history for answers. Reviving the failed MK-ULTRA program from the 1950’s, the CIA implements experimentation with hallucinogenic substances in order to create a squad of “enlightened” agents with acute telepathic abilities. Connor, Erika, Isaac and Kaseem represent this new breed of government agent: able to read any situation—as well as any mind! While this new Agency team struggles with their psychic conditions from the fallout of possessing such power, a new threat emerges, determined to bring the United States crashing down into flames—all in the name of revolution! Join Shine, a young but unyielding teenage girl, as she races to find the true story behind the tragedy that wrecked her family and shattered the sport of Bonk Racing to its core. Along with her trusted robot technician, Gabbo, and her sentient Bonk Racer car, Shiza, Shine will discover that learning the truth about her future is as dangerous as the tragic past she is trying to forget! Told in a series of legs within the race of all races-the Super Bonk Rally, this thrilling series spans amazing landscapes and death-defying terrain, as these racers go PSYCHO BONKERS!

Collecting together Aspen’s first full-length all-ages series in its entirety, this amazing trade paperback includes a comprehensive cover gallery, concept art, and a whole lot more. Don’t miss out on the series that redefines what it means to go full throttle! Ghouls are cool…or so Sudana and Munch are told, as they encounter firsthand the bloodthirsty undead! And, will they be their next unlucky victims? Meanwhile, Hank and Sparkles attempt to deal with the fallout of Hank’s powers vanishing into thin air. Yet, they may also be unable to survive, as the return of the Magic Harvester puts all beings of magic on notice for their lives! It’s a road trip of epic proportions as Theo, along with Kiori and Thom, hit the highway on their way to college. But, this isn’t a leisurely Sunday drive as a new terror unlike anything they’ve ever seen before is hot on their trail. Burning rubber has a whole new meaning! And just what is going on in Perspecta?!? While Ara shares her story with the young D’jinn she discovered lost in captivity, the mother she is searching for gets to know the other D’jinn trapped under Torinthal’s control, as they share their own tragic tales. The Fall of the D’jinn continues! Hank and his friends search for clues within a private magic club, and discover that the art of seduction has its disadvantages that could lead to them never escaping. Meanwhile, Sudana and her allies come face-to-face with the Magic Harvester—with fatal results! With the Earth literally falling apart, it’s up to Theo and his friends to try and save the day…again. Meanwhile, Perspecta has it’s own civil war taking place and a new power player has entered the picture which could spell certain doom for every living being there! And why is Dev trampling across the city like he’s Godzilla?!? Find out as the newest issue of Shrugged volume arrives! Since the team rescued the group’s newest member, the cyber boy Asher, from the corporate megalomaniac, Drazic, their world has been in constant turmoil! Devyn and Molli find their bandit crew forced to do the bidding of an underworld gangster, Sir Penny, after borrowing and destroying his favorite ship, The Dark Lightning. Yet, even if they survive Sir Penny’s harrowing missions–how will they escape the clutches of a ruthless scoundrel plotting to kidnap Asher?!

Creator and writer Mark Roslan (Broken Pieces), joined by penciler Angel Tovar and colorist Erick Arciniega, bring you one of comics’ most bombastic sci-fi, action adventure series! Collecting together the entire volume 2 storyline and including a complete cover gallery, make sure to strap yourselves in because BUBBLEGUN Volume 2 is gonna take you on a wild ride! The best-selling Aspen series from creator Siya Oum returns!
In the epic first volume, the tough-minded Lola learned the brutal reality of the apocalypse within the confines of the ruthless Wasteland Trading Company led by the treacherous Edgar and his posse! However, the true challenge still lies ahead, as her desire to be reunited with her lost parents continues to burn greater than ever!

Collecting together LOLA XOXO Volume 2 in its entirety, this amazing trade paperback includes a comprehensive cover gallery and a whole lot more. Don’t miss out on the series that welcomes all to enter the Wasteland!