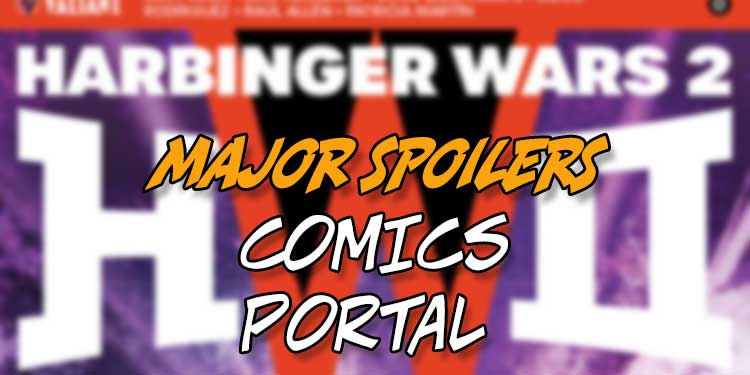 I’m always interested when a comics company tries something different in order to get the word out about their product.

In a recent news release posted here at MajorSpoilers.com, word came out that Valiant Entertainment has mailed out a special edition of a prelude to their huge event this year to those who ordered them.

I’m interested to see how this will impact sales of Harbinger Wars 2. When you’ve been around comics as long as I have – decades, really – you see how the comics industry has changed.

There were days in years gone by when fans would subscribe to various titles. I did that with several books because there was no such thing as a local comics shop back then. You had to try to find them at drug stores or Walmart-like businesses.

It often didn’t go well. So when I saw an ad saying you could get issues sent to your house, I jumped on it, sending my check in right away!

Issues would arrive at my home, wrapped in thin brown paper and folded in half. Right away, I had a problem with that, although I’m not as condition-conscious as many of my friends have been, even back then.

It looked as if someone had sat on each one several times as well. But hey, I just wanted it to read, after all, so I didn’t get too upset.

I don’t know whether I had a delivery person into comics or what, but the issues arrived extremely irregularly. Some would come a week or two before another issue, and some never were delivered at all!

It wasn’t long before I gave up on that system. Of course, the arrival of a nearly LCS helped that happen!

IT STILL COULD WORK, THOUGH Although I’m not a fan of the process it took to get this exclusive comic – you had to collect and send in a number of coupons to order it – it’s a process that can be measured. You can get an idea just how many people might be interested in Harbinger Wars 2 based on how many people jumped through the hoops in order to obtain it.

I imagine that number, no matter how big or small is one that will remain internal with Valiant for at least a while. If it has been a success, though, you can look for the company to do this again in the near future. If not, well, it was a good try!

I admit I didn’t go through the process to get one. I was aware of it, though, since I do get information from Valiant on a regular basis as a member of the comics press.

We’ll know that people have begun to receive them when individual issues start to appear on eBay or get posted in photos on social media. Sadly, not everyone who buys such comics offerings wants to keep them for themselves, so we should see at least some of them up for sale. It’ll also be fascinating to see how much sellers want for them as well.

I don’t know how they were packaged for sending, either. I doubt they came out wrapped only in brown paper, but I’m not sure a lot of money was invested to keep the individual issues in mint/near mint condition. They are preludes, after all.

HOW WILL THIS IMPACT SALES? Of course, the ultimate sign of success will be raised awareness and sales of Harbinger Wars 2 when it hits later this year.

I have long been a fan of Valiant comics, even back in the first go-round with these characters. They have always been well thought out, well made and well promoted.

I just wish they sold more!

I’ve interviewed folks with Valiant several times for my podcast, and I have relayed to them what some store owners have said in private and in public, that Valiant titles just don’t sell for them. Granted, most stores push the companies that will bring in more dollars, and that has been Marvel, DC, and Image, to name a few.

Valiant does have a strong core group of fans who are very devoted. I honestly wish there were many more of them! I mean, I read their books, and they’re great! Archer and Armstrong, Bloodshot, X-O Manowar, Harbinger, you name it … terrific books made by high-octane creators like Matt Kindt and Jeff Lemire, to name a few.

Valiant is even breaking into movies and other videos with their characters. Granted, they have been slower than I hoped they would be when it comes to being released, but what I see of them I really enjoy!

That’s why I appreciate Valiant taking chances like this mail-away prelude. Only the folks at Valiant will know just what impact this book will have. I hope this, along with whatever else they’re doing to promote this upcoming comic, which will have a “seismic” impact on their line, as they describe it. I hope it will result in more fans, more attention, and more money to do even more with Valiant!

Do you buy Valiant comics? If so, what do you like about them? If not, why not? Did you order this mail-away prelude book? What could Valiant do to make you a fan? Whatever your opinions, be sure to share them in the space below!