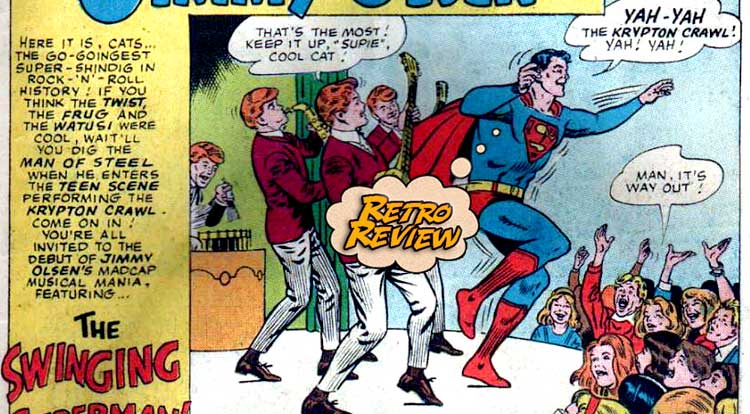 Once upon a time, The Beatles were somehow a strange and distressing concept for grown-ups to handle.  That’s where Superman comes in!  Your Major Spoilers (Retro) Review of Superman’s Pal, Jimmy Olsen #88 awaits! Our story begins with Jimmy greeting his girlfriend (known to fans of Silver Age DC as ‘The Worst Girlfriend In The World’) Lucy Lane at the airport, only to find that she has once again turned her eye to another guy.  When Jimmy tries to step in, he is nearly trampled to death by a mob of Rick Rock’s fans, and is barely saved from bloody death-by-knee-socks by Superman.  With his romantic hopes once again dashed by Lucy, Master Olsen returns to the one trick that always works: Completely changing himself to win her love!

Sixty percent of the time, it works every time!

Abusing his relationship with both Superman and the press, Jimmy prepares for the first appearance of his band, ‘Jimmy Olsen and The Carrot Top Cut-Ups’, but realizes too late that his drummer didn’t show up.  A shifty-looking stranger offers to help, but before the music starts, Superman suddenly gets a strange look on his face and brings up a buried memory of his childhood on Krypton… Like his famous offspring, Jor-El was a man of quick wits, and he quickly responds to the alien ‘Pied Piper’ with a brilliant plan, but his super-son is more focused on the amazing music he has suddenly recalled… Even under the spell of the Krypton Crawl, Superman has enough control to use his powers defensively, stopping threats while dancing, and taking the entire Fourth Of July crowd through the streets of Metropolis, off to the docks in the footsteps of his long-gone pater familias.

Shaking off his trance, Superman goes about his business, while Jimmy and his band enjoy the positive press.  Well, not all his band, since his mysterious new drummer disappears from whence he came…

…which is to say, back to his nefarious spy overlords! Working with the photographer who has been covering Jimmy’s new endeavor, he wants to free the creatures in the ship to…  I dunno, mess up Metropolis’ sea-lanes or something?  It’s not important, really, because The Man Of Steel has seen through his ruse, thanks to Jimmy Olsen’s experience as a photog… And boom!  That’s how The Beatles didn’t appear in a Superman book, but they totally did, y’all, as the Krypton Crawl’s refrain of “Yaaaaa! Yaaaaa! Yaaaaa!” is clearly based on their “Yeah, yeah, yeah”.  This issue features two additional tales, each of which begins with a classic Mort Weisinger splash page that sets up a strange, compelling mystery… Also worth discussing, Jimmy’s assertion that Superman is “the only human” who can lift him is factually untrue, what with Superman not being a human at all.  This issue (which I uncovered during research for an episode of ‘Legion Clubhouse’, he said with a sudden plug for one of our fine podcasts!) is also chockfull of old-school advertisements, including this fascinating bit of business… Yes, Faithful Spoilerites, it’s FOUR different ways to injure yourself with only things you find around the house!  I wonder how many kids got the plans to build a unicycle and broke a bone or seven learning to ride the thing back in ’65?  Either way, Superman’s Pal Jimmy Olsen #88 is one of those notorious books that proved the “hook ’em with an intriguing cover” Silver Age sales technique works, as well as serving as a look into the zeitgeist of the mid-sixties with solid art and honestly pretty forgettable stories, earning 3 out of 5 stars overall.  I always recommend a dose of Weisinger-era DC for those who might need a little pep in their step and/or the ability to build their own speed-bike in an era where not only are helmets optional, you’ll probably get a free pack of Lucky Strikes in the kit…

One of those tales that isn't really all that memorable except for the cover, which proves that Silver Age sales tactics work...