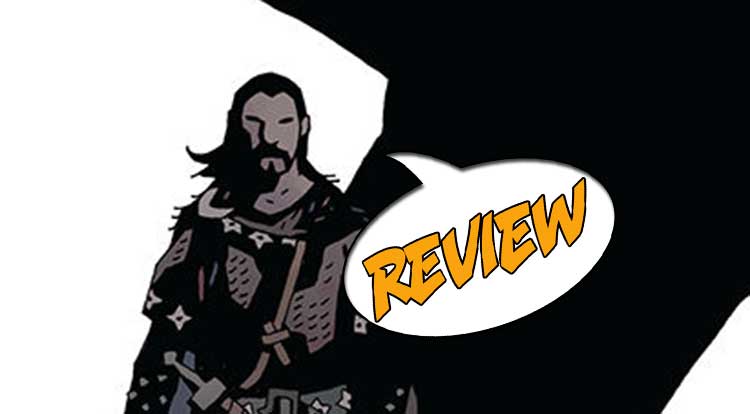 By Stephen Schleicher on January 4, 2018 0 Comments PREVIOUSLY IN HELLBOY: Hellboy is dead. Now in Hell, Hellboy fights demons, while learning important (after)life lessons. He also has a chance to hang out with some of his oldest enemies.*

Koshchei first appeared in Hellboy: Darkness Calls, and instantly became a fan favorite as he who can not die did, and nearly took Hellboy with him. Koshchei the Deathless is a figure from Slavic folklore, and his connection to Baba Yaga is just too good of a tale to pass up. Which brings us to Koschei the Deathless #1. While some of the elements in this story appeared as a back-up in Hellboy: The Wild Hunt, there is a whole lot more to the story, and Mignola is able to expand in this mini-series.

The story beings in Hell, where Koshchei and Hellboy are sitting in a bar sharing a drink, which quickly leads to Koschei sharing his origin story in more detail than Hellboy probably wanted to know. Like many evil characters who have seen the error of their ways, Koshchei’s tale is filled with tragedy and sadness, including his own wife conspiring to kill him, and deals made at the moment of death to return him to life. As Mignola tells the tale, he does build up a lot of sympathy for the character, so much so that by the end of the issue, readers are fully vested in following Koshchei and his most loyal followers on a quest to kill the only remaining dragons on Earth. Did I mention one of those dragons is responsible for bringing him back to life twice?

When this series was first announced, I initially was in the camp of “do we really need an origin story of THIS guy?” But this is Mignola, and he has never disappointed when it comes to making folklore relevant for modern audiences.

SOLID ART FROM PAGE ONE

I’ve known Ben Stenbeck’s art mostly from the BPRD series, and it has always impressed me. In Koshchei the Deathless, Stenbeck is cranking his skills to eleven and really delivering something that feels familiar, yet fresh. Stenbeck brings metaphors and tales to life in simple yet dynamic panels of light and shadow. His art style is very much in the Hellboy style we expect – and he continues to breathe life in the living, and an eerie sense of dread in the dead and magical characters.

Bringing it all together is Dave Stewart’s colors. The battle against the forces of light and the serpents is fantastic when panels suddenly light up, and the glow in the eyes of the characters the inhabit this world is creepy as heck. I’ve said it again, but it bears repeating; Dave Stewart’s minimal color palette works perfectly in every series he’s worked on, and I am surprised more people aren’t pointing this out and trying to incorporate the technique in their own comics.

BOTTOM LINE: CHECK THIS ISSUE OUT

Not everyone is a fan of Hellboy comics, and fewer seem to be keen on the adventures of the side and minor characters that inhabit the Mignolaverse. For those that give these “other” series a chance, a world of great, often tragic tales, can be found within. Koshchei the Deathless #1 is one of these series that readers should check out. It is solid storytelling with great art. Can’t wait to see how the characters take on the quest as this mini-series progresses.

Koshchei the Deathless #1 is one of these series that readers should check out. It is solid storytelling with great art.

*Yes, you should probably read BPRD: The Devil You Know #5.