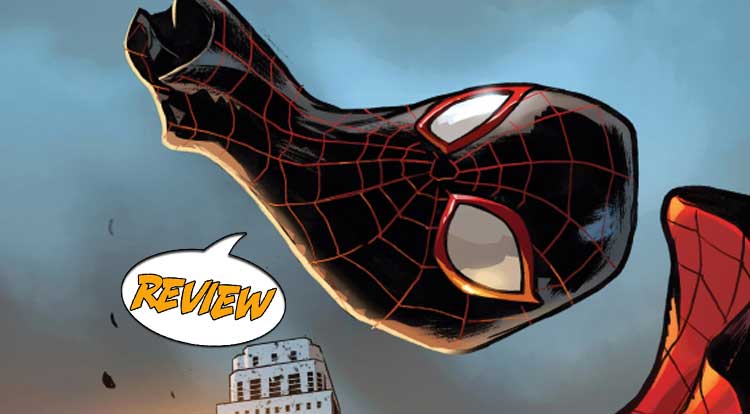 The first time the Spider-Men met, there were two universes in play. Previously in Spider-Men II: “The Spider-Men first met when a villain broke through the wall between their dimensions.  At the time, Peter searched for a Miles Morales in his world, and found… nothing.  All records of that Miles had been erased when his best friend, former Kingpin Wilson Fisk, helped Miles escape a criminal life to marry his soul mate, who passed away some years later.  Since then, Miles Morales and many of the people he loves have been brought into Peter’s universe, where he’s continued fighting crime with Peter’s blessing.  But, in a tense moment, Peter seemed to regret that, investigating a new dimensional rift that dropped robot parts across the city.  The Spider-Man encountered the mercenary Taskmaster, who beat them both after Miles got distracted chasing Taskmaster’s employer: Miles Morales!”

WHO IS MILES MORALES?

In the middle of a battle with Taskmaster, Peter Parker and Miles Morales are still arguing over whether Miles should even be Spider-Man, regardless of how good at the job he is.  Their battle rages through one of the many abandoned buildings in New York while, elsewhere, the other Miles Morales finally gets the device he’s been looking for: A dimensional transporter.  Peter takes on Taskmaster one-on-one (annoying the hell out of him by asking advice on how to deal with his young namesake/protegé, which I love), while Miles tracks down his duplicate, who escapes into another universe.  The issue ends with the elder Miles returning to the Ultimate Universe, or a reasonably similar duplicate, including Ultimate Avengers, young Peter Parker and the art of Mark Bagley, serving as a capstone for that lost setting and a reminder that, in comics, nothing ever really goes away.  Of course, that doesn’t stop the issue from ending with the indication that Miles is giving up his role as Spider-Man forever…

“THERE’S NO SUCH THING AS CLOSURE.”

With Bendis exiting Marvel Comics in the near future, it makes sense that he get a chance to close the book his way on the universe that he and Bagley created.  After all, in some ways, Ultimate Spider-Man saved Marvel from the 2000-era doldrums and ushered in a new era at the House Of Ideas.  Even I, the one guy who doesn’t really care for Ultimate Spider-Man, recognize the importance of that book, and this issue is a lovely way to wrap it all up.  The art is beautiful in both parts, and I appreciate the use of Ultimate-style mixed-capital word balloons and coloring in that alternate universe.  That said, I hope they’re not retiring Miles just because Bendis is leaving Marvel.  As complicated as it can be to have multiple characters with the same name, Morales Spider-Man is different enough from Peter Parker to justify it, and his membership in the Avengers and Champions makes me very happy.  (Also, Marvel has enough problems with P.R. right now that getting rid of one of their most fascinating POC characters is just plain bad optics…)

THE BOTTOM LINE: A FAREWELL TO THE ULTIMATE UNIVERSE

In short, this book made for a nice read, but it suffered from an ambiguous ending and Bendis’ trademark “No Climax” climax, but the charm of the dialogue and characters helps to offset that somewhat.  Spider-Men II #5 is a book that I didn’t understand the need for when it was announced, but now appreciate as a story and as a bookend for that long ago landmark #1 issue, earning 3.5 out of 5 stars overall.  Seriously, though: Marvel, if you’re reading this, don’t sideline this Spider-Man!