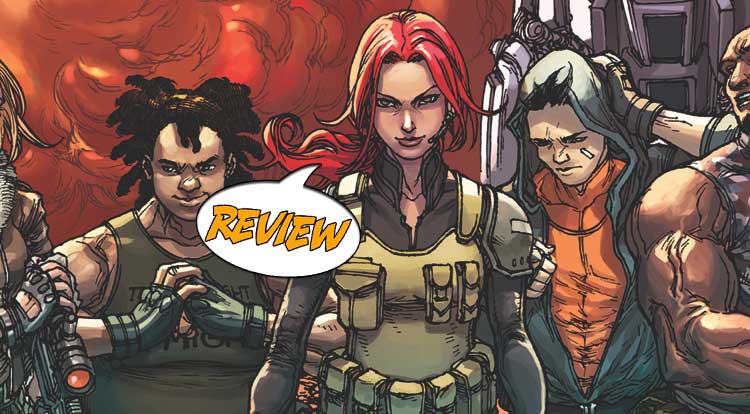 As a fan of G.I. Joe since 1982 or so, I’m really psyched for this series, but I have one secret: Part of me is just here for Skywarp.  Your Major Spoilers review of Scarlett’s Strike Force #1 awaits! Previously in Scarlett’s Strike Force: “They’ve fought back invasions from home and afar-now, they’re back on Earth, and ready to take on the wildest, weirdest threats out there!  It’s Scarlett’s G.I. Joe team, the Strike Force, against a brand-new Cobra Commander, a revitalized Cobra, and everyone else trying to conquer Earth…  or destroy it!”

Okay, so this issue is part of the new G.I. Joe era, which is driven by ‘Revolution’, the Hasbro-properties crossover, which means that our team consists of Scarlett, Roadblock, Rock N Roll, Quick Kick, Spirit, Cover Girl, Salud, Spitfire, Spectrum (Matt Trakker, formerly of M.A.S.K.) and former Decepticon seeker jet Skywarp.  Also, their medic, Doc, who is half-Dire Wraith and thus a crossover with ROM.  The villains are Cobra, with our primary antagonist being Cesspool (the villain of the much-maligned 90s Eco-Warriors G.I. Joe incarnation) working for the new Cobra Commander, once called The Baroness, who is using Dire Wraith magic to create new warriors for Cobra’s armies.  There’s a lot of exposition to go through in these pages, but all of it ends up working and giving us some really lovely moments (Cover Girl’s enjoyment of her new M..A.S.K. enhanced technology, Rock N Roll and Skywarp’s bond, the subtle discontent in Destro at seeing his lover become a new, unhinged Commander) and things end with a LOT of balls in the air and also a swarm of dinosaurs…

I LOVE THIS ROSTER

I have to say, I enjoy the heck out of this story, as it’s more than a little nuts, but there is a LOT going on here, and a lot to catch up on for those who haven’t been reading all the crossover material.  Thankfully, Sitterson’s script does a good job of presenting our players and the new state of the universe.  On the one hand, seeing this sort of crossover is great for story and shared-universe purposes, but fans of the down-to-earth, military-style G.I. Joe are going to have a little work ahead of them.  For me, seeing so many familiar faces and situations makes for a really fun read, and the art makes things even better.  The idea that this is a book that will address all the wacky Cobra-La shenanigans and side-trips of Hasbro history, with a Decepticon and former Mobile Armored Strike Kommand member on board appeals to me, and the final page expectation that we’re gonna be fighting a flock of raptors (?) makes me excited for more of this title.

To be honest, I’d be on board for any book where Scarlett is in command, Duke is a desk jockey and Snake-Eyes is out of the picture, but this book is a step beyond that.  Scarlett’s Strike Force #1 may not be for everyone, but if you’re interested in exuberant, all-out action with a really interesting cast of characters and kinetic art, it may be for you, earning 3.5 out of 5 stars overall.  Heck, if they can give me an appearance by Trakker and Golobulus, we may finally get Flash and Breaker back…  Or are they dead again?

Gets a lot of nearrative heavy-lifting done without skimping on the action or character bits and assembles a fascinating team...