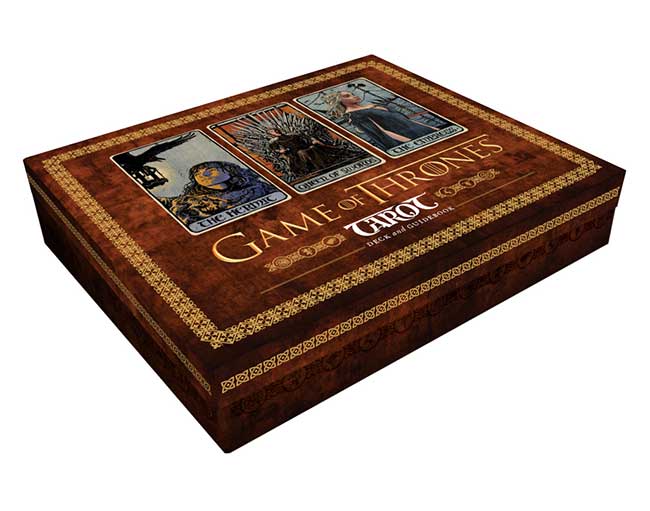 [Merch] Game of Thrones gets the tarot deck treatment

No one knows what 2018 will bring, which is probably why a tarot deck will come in handy in the next year. But you don’t want just any ol’ tarot deck – no, no, no – you want a Game of Thrones Tarot deck from Chronicle Books and HBO.

This deluxe boxed set houses a beautifully rendered and wholly original tarot deck. Each card, from the Major Arcana to the Cups, Coins, Spears, and Swords of the Minor Arcana, offers a rich and meaningful path to divination. Game of Thrones fans will pore over a treasure trove of much-loved characters, scenes, and stories depicted in a style both surprising and true to the world of Westeros. An accompanying hardcover booklet explains the symbolism of each card and various ways to use them in a tarot reading.

The Game of Thrones Tarot deck comes from Liz Dean with art by Craig Coss. The $24.95 deck domes with a very nice box and a hardcover booklet to help guide you in your quest to seek answers. Unfortunately, the Game of Thrones Tarot deck won’t be too helpful to foresee what is happening in the first few months of 2018, as the tarot deck is scheduled to arrive on March 20, 2018.