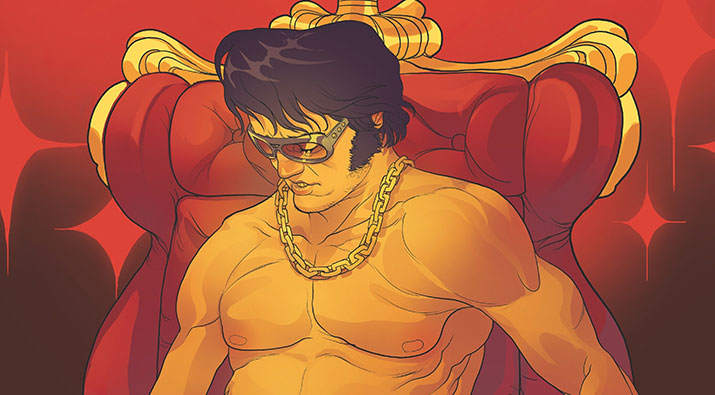 Tell me you didn’t love the crazy Bruce Campbell flick, Bubba Ho-Tep. A perfect movie that was released at a perfect time. Ever since there has been speculation we’d get a new movie, but that hasn’t materialized yet. Instead, we can enjoy the comic book adventures of Elvis in Bubba Ho-Tep and the Cosmic Blood-Suckers.

Bubba Ho-Tep and the Cosmic Blood-Suckers is written by Joe R. Lansdale and Joshua Jabcuga with art by Tadd Galusha. The story takes place before the Bubba Ho-Tep flick and tells the secret story of Elvis being hired by President Nixon to defeat an alien invasion.

Part of a secret government organization designed to protect civilians, Elvis Presley and a group of hardcore warriors set out to save the world from an invasion of hive-minded, shape-shifting, vampire-like creatures from a dark dimension.

“Bubba Ho-Tep was an accidental story that turned out to be my first film adaptation, and it’s still going strong in story and film,” said Lansdale. “And finally, it has inspired a background story that was first a novel, and is now represented in the medium that first made me want to be a writer: comics. Graphic novels. What we used to call Funny Books. I’m excited and looking forward to readers discovering it all in color and looking fine. May more Bubba comics burst into existence and give the world the true story of how the world has been protected from evil, and for quite some time. Thank goodness these defenders are out there, working in the shadows.” The first issue of the series is scheduled to arrive in March 2018.