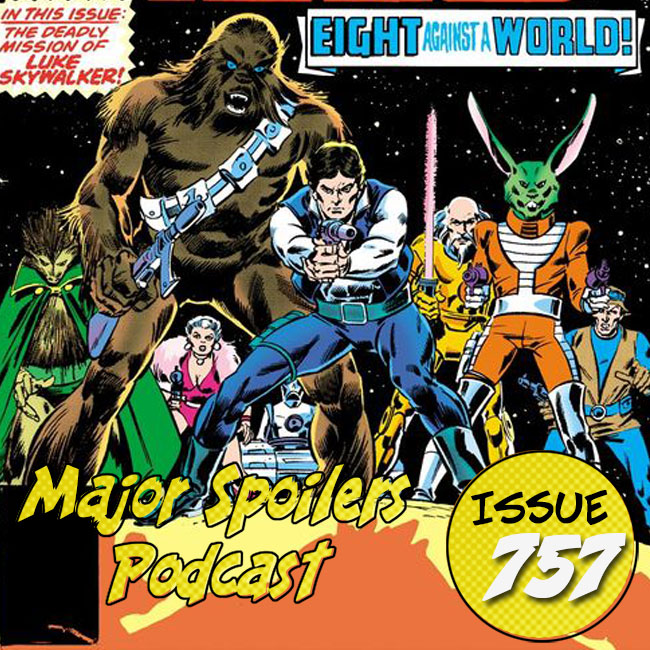 This week on the Major Spoilers Podcast: Jetsons #2, Rasputin Voice of the Dragon #2, Bug!: The Adventures of Forager #6, and Cosmo #1 all get high praise this week. Plus, the Magnificent Seven take on Godzilla, as the Starkiller Kid finds a new home for the Rebels.

NEWS
Miles Morales gets some movie love from Sony

MATTHEW
BUG!: THE ADVENTURES OF FORAGER #6
Artist: Mike Allred
Writer: Lee Allred
Publisher: DC Comics
Cover Price: $3.99
This is it: part six of “The Domino Effect”! Chagra promised he wouldn’t alter reality until Forager returned to New Genesis, but did anyone actually believe him? Seems our beloved Bug might have. Luckily he’s got a savvy teddy bear and ghost girl around to keep him focused, or else he might fall apart like a house of cards!

RODRIGO
COSMO #1
Writer: Ian Flynn
Artists: Tracy Yardley, Matt Herms, Jack Morelli
Cover: Tracy Yardley
Publisher: Archie Comics
Cover Price: $2.99
NEW ONGOING SERIES! “Space Aces” – Part One: Get ready for out of this world fun in the ALL-NEW sci-fi adventure series COSMO! Join Cosmo and his Martian crew as they find adventure and dangers in the deepest corners of space! Their latest mission turns into a much larger adventure when they stumble upon their most unique specimen yet: A panicked human!

ASHLEY
THE JETSONS #2
Writer: Jimmy Palmiotti
Art: Pier Brito
Publisher: DC Comics
Cover Price: $3.99
SOLICITATION: Technology has made life in the future a lot easier—or has it? In this issue, George is attacked by robotic repair lizards while Judy works to decipher her recorded dreams on a tight deadline. Even Elroy’s childhood is disrupted by tech when the ground starts to give way during a playdate. And Jane already had the weight of the world on her shoulders—but learning she has to actually save the world while managing her family is even worse!

Major Spoilers Poll of the Week: Best Cover Edition (Four in a Series)

DISCUSSION
Eight for Aduba-3 (Star Wars #7-10 November, 1977)
Writer: Roy Thomas and Howard Chaykin
Artist: Howard Chaykin
Publisher: Marvel Comics
Han Solo and Chewbacca are hired by Ramiz, a moisture farmer on Aduba-3, to protect his village from a band of local thugs known as the Cloud-Riders led by Serji-X Arrogantus. Han and Chewbacca hire six misfit spacers to help them with the task, including Don-Wan Kihotay, an old man who thinks he is a Jedi Knight, and Jaxxon, a rabbit-like creature with a mean disposition. Serji-X tries to convince Han to forget about his mission to protect the peasants and even offers him compensation, but Han declines. Meanwhile, on Yavin 4, Luke Skywalker, C-3PO and R2-D2 leave in a scout ship to search for a location for the new Rebel Alliance base. - via Star Wars Wikia