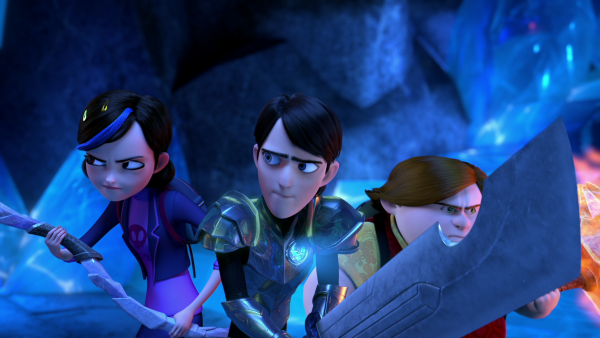 [Interview] Marc Guggenheim on Expanding the World of Trollhunters Season 2 and Legends of Tomorrow while also serving as an executive producer and writer for Dreamworks/Netflix‘s beloved animated series, Trollhunters, that drops its binge-able second season this Friday, December 15th.

Leading up to the return to Arcadia in Trollhunters season 2, Major Spoilers caught up with Marc on the phone to dive deep on what is coming for the show, for Jim and for the larger franchise.

MAJOR SPOILERS: We’d love to address the elephant in the room right off the top: how was it moving forward with production on Trollhunters after the loss of the series lead, Anton Yelchin last year?

MARC GUGGENHEIM: I’m actually really glad you brought that up. What people might not know is that we recorded most of season 2 prior to Anton’s passing. In fact, after the Grit-Shaka episode he asked us to write something that would allow him to stretch his legs that way and, truth be told, the only shadow over season 2 is: the fact that Anton hasn’t – never got a chance to – see how to show was received and loved by everybody.
The work he did in season 2 is nothing short of spectacular and I think it’s a real testament to his talent. I’m really looking forward to people seeing it. I’m glad you asked that question. I don’t want people going into season 2 not knowing that that’s still Anton.

MS: To this new season of the show more specifically, what was the most important thing for you to consider when you were approaching season 2? Sophomore years can be tough and Jim is going to need a different growth cycle now.

MG: Yeah. Look, there’s something very challenging about doing a sophomore season. The sophomore slump is a very real thing. I don’t want to speak for my partners, but I have my own philosophy about the way to avoid the sophomore slump and that is: take advantage of all the world building that’s done in season 1 and, then go bigger with it.
I think the thing about season 1 is: it was a lot of world building and table setting. There were a lot of concepts and lands to introduce the audience to and we also had to establish, essentially, the team of Trollhunters (Blinky, AAARRRGGHH!!!, Toby, Claire and Jim), and Claire had to get her shadow staff and Toby had to get his hammer and Jim had to come into his own as the first human Trollhunter. There’s a lot of pipe laying to be done in season 1 and, so what’s really exciting for all of us about season 2 is we get a chance to take all – the table’s been set – we get to take advantage of all the foundation work that we’ve been doing.
I think we all feel that season 2 is actually stronger than season 1 and, obviously, it’s up to audience – ultimately – to determine whether or not that’s true, but that’s really how it feels to us and – in large part – because while we’re expanding the world, we’re telling a more ambitious story which you can’t really do while you’re busy laying the foundation for things.

MS: You meaning “expanding the world”. Would that be more of the trolls world or more of the world above ground as we know it?

MG: Actually, both. You’ll definitely see some new locations in Arcadia. For sure you’ll be seeing The Darklands. We only got a glimpse of them at the end of season 1 and there is much, much, much more to see. It’s actually really exciting.

MS: Will there be an expansion on the bad guy front as well?

MG: Yeah. Angor Rot is a tough villain to top, but ever since the opening moments of the pilot we’ve been hearing about Gunmar and you will finally get a chance to really get to know Gunmar and we knew because of the bar we’d set with Bular and with Angor Rot we had a lot of work to do in order to get Gunmar to, basically, out-villain these two really impressive villains.

MS: As one of the kings of geekdom right now, what are some things are easier or more difficult about working in animation versus what you are doing in live action over in the DCTV realm?

MG: I’m not! (laughs). Interesting. It’s funny, in many ways, it’s almost an inverse kind of process in terms of what are strengths and weaknesses and challenges. Not to get too granular about it,  but having 100 extras in the scene in television is not that hard, having 100 extras in animation is. At the same time, though, one thing that’s really hard in live action is all the effects work and that’s not the case in animation. It’s very expensive to go and do these incredible locations  in live action, but in animation we can take you to the Trollmarket, we can take you to The Darklands. In many ways, a lot of the challenges in live action are relatively easy in animation and vice versa.
From a writing perspective, it’s pretty much the same. From a producing perspective, you’re operating with a different set of tools.

MS: A selfish question: are we going to see the gnomes returning for season 2?

MG: Absolutely! We love the gnomes! You’ll see more of Gnome Chompsky and the gnome characters – particularly Chompsky – are beloved to us and you have definitely not seen the last of them.

MS: Is there a specific episode coming up that you really want people to be looking out for?

MG: I’ll tell you, episode 205 is very strong. The amount of action in this is very impressive and, then there’s the episode I referred to that was inspired by Anton’s request of us. I apologize, I don’t remember the specific episode number – because of the long lead time of animation theses episodes were written quite a while ago. That episode is a real standout. It’s not only a standout in terms of Anton’s performance, but also it’s incredibly funny and it’s just one of the most fun episodes we’ve ever done. There’s some real gems in season 2. We’re really very proud.

MS: Looking to the larger universe that is going to be spinning out of Trollhunters in coming years: how involved are you in the expansion of Arcadia and the world? Can you give us any clues as to what that might look like going forward?

MG: Yeah, I’m very involved. Right now, we are working away on 3 Below. Co-written with Guillermo [del Toro]. The first episodes will – basically, just like Trollhunters did with its first two episodes – act as, essentially, a pilot for the show and, in many ways, I feel like I’m even more involved in 3 Below than I was at some points with Trollhunters. Pretty involved, is the short answer.
Everyone’s working really, really hard to get you additional episodes of Trollhunters as well as 3 Below and Wizards.

MS: Is all of that expansion going to be coming directly out of what happens in Trollhunters season 2?

MG: No. I can’t quite answer that. It will all become very clear.

You can catch Trollhunters season 2 on Netflix Friday, December 15th, 2017. Stills and posts from the upcoming season below: