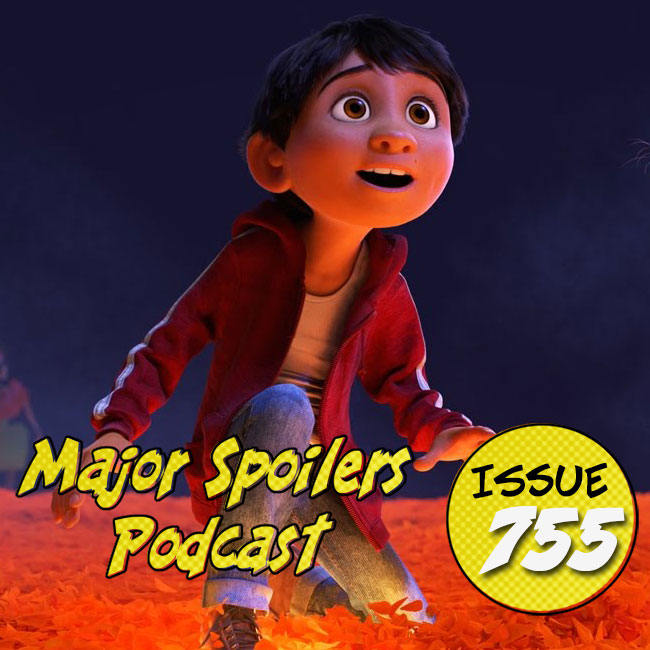 This week on the Major Spoilers Podcast: We have double the number of reviews for you this week including Asterix and the Chariot Race, Quarry’s War #1, Witchblade #1, Mystic U #1, Detective Comics #969, Santa Clause Private Eye, and COCO!

NEWS
Are you read for 20 more Marvel movies after Avengers 4?

Avengers 4 is The Finale of The Current MCU, Says Kevin Feige

Marvel Studios president Kevin Feige is promising something that the Marvel Cinematic Universe has never really had before: a finale. From the outside, the MCU’s future may seem uncertain, as the comic book movie studio keeps hidden the slate of superhero films that will hit theaters after the climactic Avengers 4.

REVIEWS
STEPHEN
ASTERIX AND THE CHARIOT RACE HC
Writer: Jean-Yves Ferri
Artist: Didler Conrad
Publisher: Orion
Cover Price: $17.99
SOLICITATION: Famous for their extensive travels around the Known World, this time Asterix and Obelix are going to meet the people of the Italian peninsula: the Italics! To Obelix’s delight, the inhabitants of Ancient Italy are not all Romans! Far from it! The Italics want to keep their independence and take a dim view of Julius Caesar and his Legions’ plans for total domination.

MYSTIK U
Writer: Alisa Kwitney
Artist: Michael Norton
Publisher: DC Comics
Cover Price: $5.99
Leave the world of the mundane behind and step through the magical doors of Mystik U! After a tragic accident, a young Zatanna Zatara, under the guidance of Rose Psychic, enrolls in a mysterious university that teaches its students how to master their unique brands of magic. Will Zatanna fit in with her new classmates (Enchantress, Sargon the Sorcerer, Faust and more!) and unlock her true potential? Find out in this exciting bimonthly miniseries from novelist Alisa Kwitney (DESTINY) and Mike Norton (Revival, Runaways)!

DETECTIVE COMICS #969
Writer: James Tynion IV
Artist: Raul Fernandez, Alvaro Martinez
Publisher: DC Comics
Cover Price: $2.99
“FALL OF THE BATMEN” part one! Everyone in Batman’s orbit is broken somehow—some more than others. For Clayface, keeping the pieces of his psyche together has been a years-long struggle…and it’s a war he may be about to lose! And as the team tries to pull itself back together, their enemies have learned something from Batman’s newfound spirit of cooperation…and have formed a cabal of their own!

SANTA CLAUS, PRIVATE EYE
Darby Pop Publishing
Writer: Jeremby Bernstein
Artist: Michael Dorman
One day each year, Santa Claus delivers presents to children. The other 364, he moonlights as a down-on-his luck private dick named Nick Santana, working dark streets filled with gangsters, guns, and femme fatales. After all, the nicer they look, the naughtier they can be.

WITCHBLADE #1
Writer: Caitlin Kittredge
Artist: Roberta Ingranata
Publisher: Top Cow
“LIFE AFTER,” Part One
Gunned down and left for dead on a New York rooftop, Alex Underwood’s life should have ended there-but instead, at the moment of death, she became host to the Witchblade, a mystical artifact that grants the woman wielding it extraordinary powers. But the power comes with a heavy cost, and Alex finds herself thrust into the center of an unseen battle raging on the snowy streets of NYC. Demons are real and walking among humans, and every one of them is intent on taking out the Witchblade’s newest host before she becomes too strong to kill. But the artifact chose Alex for a reason, and she’s not going down without a fight.

Major Spoilers Poll of the Week: Best Cover Edition (Two in a Series)