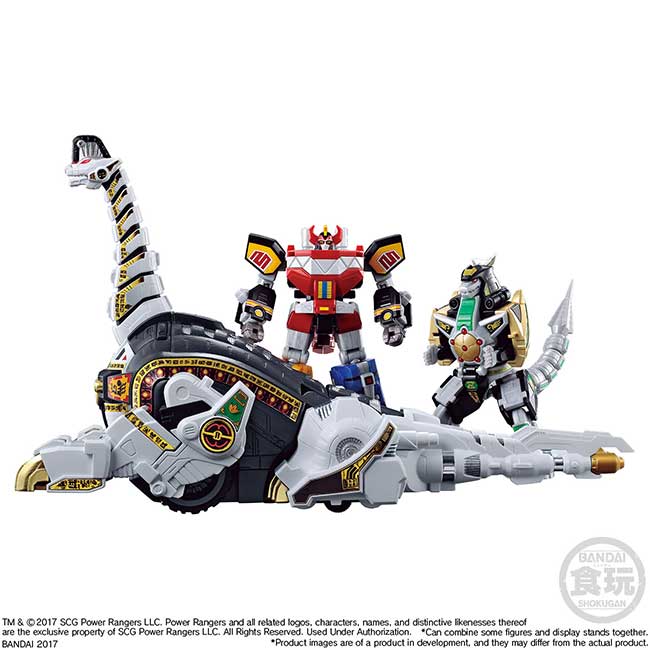 Units are now available from authorized Bluefin retailers nationwide and also from select leading online outlets in time for the start of this year’s Holiday Season. Please check your favorite online and/or brick-and-mortar outlet for immediate availability. They are also available from Bluefin’s own on-line store: https://shop.bluefinbrands.com/.

The Power Rangers Megazord and Dragonzord Super Mini-Pla Kits from Bandai’s Shokugan collections are fully articulated and faithfully recreate the proportions and details from the original Mighty Morphin Power Rangers TV series. By combining all 5 Zords from the Megazord kits with the Drangonzord kit, fans can create the all-powerful Mega Dragonzord!

Bluefin will release the Titanus Super Mini-Pla Kit in Spring 2018 as the latest addition to the Bandai Shokugan Power Rangers line.

As the Super Mini-Pla name implies, these compact model kits offer simple pre-colored snap-together assembly. A nipper or sprue cutter (sold separately) is highly recommended for assembly, but the following kits do not require glue.

Set consists of 5 core Zords – Tyrannosurus, Mastodon, Triceratops, Saber-Toothed Tiger and Pterodactyl that can be combined to form the Power Ranger Megazord. The kit also comes with a Power Sword accessory. Enjoy the Megazord by itself or with the Dragonzord to create the all-powerful “Mega Dragonzord.”

Catch the debut of the Dragonzord, the Zord of the Green Power Ranger. Enjoy the Dragonzord by itself, or go into Dragonzord Battle Mode by combining it with the Mastodon, Saber-Toothed Tiger, and Triceratops Zords from the Megazord kits. Collectors also can combine all of the components from the Power Rangers Megazord Super Mini-Pla Set to create the all-powerful “Mega Dragonzord.”

The 3rd release to be added to the Power Rangers Super Mini Pla series. The transformable unit may be posed in “Carrier Mode” and “Attack Mode” and is battery powered and can be combined with the Megazord and Dragonzord kits to create the imposing Ultrazord. Set for release in Spring 2018.  Additional details on the Titanus Super Mini-Pla Kit will be released early next year.

Buzz Lightyear Collectible Robot takes toys to infinity and beyond!

New statues and action figures in stores this week