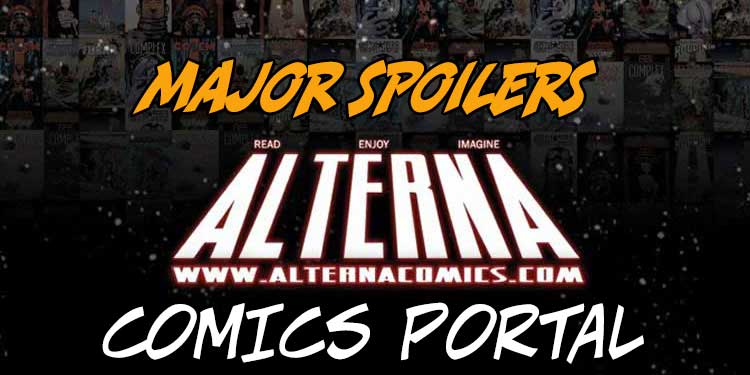 COMICS PORTAL: Getting Into More Stores!

There’s been a really interesting development when it comes to selling comics, and it has to do with Alterna.

WHAT IS ALTERNA COMICS DOING?

I really need to be buying and reading more Alterna Comics!

They’ve been busy making agreements with other locations to get their comics in front of more people, nothing against comics shops!

As Stephen Schleicher reported, they’re run commercials in select markets, they’ve worked with bookstores and Toys R Us, and they’ve sought out local newsstands and grocery stores in order to expand their product distribution. I mean, I’ve seen some DC and Marvel books in Books-A-Million, for example, but not many. And they’re often over a month late!

Not only that, Alterna lowered the prices on many of their books and have gone back to printing on newsprint to help make that possible.

These are all significant steps in an attempt to attract current and new readers to their comics.

I have to say, I applaud their efforts and hope they do well!

They’re likely vanguards of a new tomorrow that includes comics shops and these other venues.

I find myself wishing other companies would join in this effort!

THE INDUSTRY CAN’T REST ON ITS LAURELS As much as I love local comics shops, I see some transition and some reduction in fans who go there.

And that worries me. A lot.

The good news is that there are more women who shop at local stores. We can’t just depend on the young guys any longer!

The bad news is that the cost of comics and the current expanded number of titles available make it tough for fans to keep up with books they like. They often have to work hard to find issues that for whatever reason didn’t make it to their regular store.

I’m sure I’ve related the story of a LCS that dropped a lot of Indie and other less-selling comics because their customers told them they wanted everything Marvel was putting out. Good for Marvel, bad for those of us who are into Indie comics.

I keep running into fans who say, “What are you worried about? Comics will be here forever!” I’d love to think that, but I keep seeing sales decline and stores close, so I don’t think complacency is the best idea right now. It’s time for me to come clean here – I’ve only read one Alterna title, and that was Mr. Crypt because I was interviewing Troy Vevasis, who created the title. I enjoyed it a lot!

However, with the busy-ness of things, I haven’t looked into their other books. I also was on their publicity list, and received an email asking if I still wanted to be on it. I replied, “Yes,” and I still get their emails, but I’ve been in the habit of putting them aside for later. And “later” hasn’t come yet.

I really believe that anyone who works so hard at making the industry better as a whole deserves support.

The sad thing is that I honestly haven’t seen Alterna comics in many stores, or even at many conventions.

I think we should change that, particularly given their forward-thinking efforts. I mean, I’d like to see other companies’ comics in bookstores and Toys R Us, among other locations. We simply can’t afford to keep relying on shops and subscription services any longer.

I’m going to explore what Alterna has to offer, and buy their books when I find them in any stores. I recommend you do the same, especially during this holiday season!

What do you think? Is Alterna making the smart moves? Or should comics stay in the LCS environment? Which Alterna comics do you read and would like to recommend? Whatever your opinion, please share your thoughts in the space below!