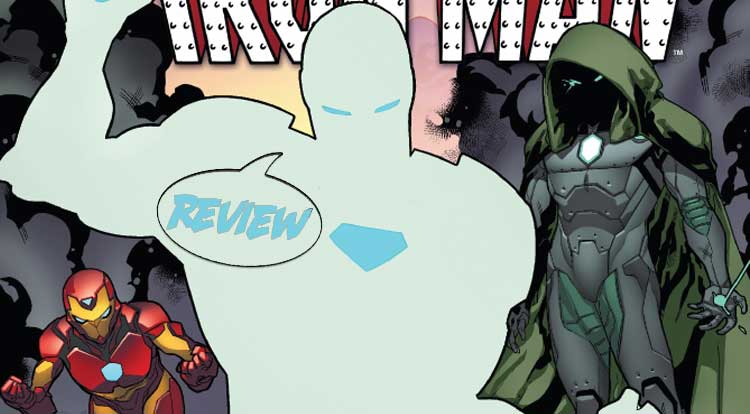 Tony Stark’s body is missing.  Now, the two people who claim his mantle, Riri Williams and Victor Von Doom, must join forces to find out why…  Your Major Spoilers review of Invincible Iron Man #594 awaits! Previously in Invincible Iron Man: “THE SEARCH FOR TONY STARK continues, as some very surprising people from his present, past and future come together to help.  Who will wield the power of Iron Man?  It’s all building to one of the most-anticipated moments in Iron Man history!”

WHAT, EXACTLY, HAPPENED TO TONY AGAIN?

Cleverly, the first page recap of what happened previously takes the form of a message from Riri to Victor Von Doom, explaining everything that has happened and how she needs his help immediately.  The reason for that is that the Stark Industries board of directors has taken it upon themselves to declare Tony dead, vote him out and take power for themselves, reclaiming all of his property… including, they believe, Miss Williams’ armor.  While she fights it out with the mutant called Hijack (whose power is taking control of any vehicle, which is super-cool, and she says as much), Doctor Doom goes searching for Chemistro, who broke out of prison recently.  Things get terrible for Doom when ALL of Chemistro’s jailbird buddies attack en masse, forcing him to retreat.  Tony’s biological mom, Amanda Armstrong, takes care of the board’s threat with swift and blinding violence, beating the man behind the attempted coup with her guitar (!!), “convincing” the board to delay the vote.  Meanwhile, Tony Stark’s body, clad in his old Mark V armor, lies on the floor in a dark room somewhere…

THE RETURN OF… A BUNCH OF MOOKS?

This issue brings back one of the worst recurring ideas in Bendis’ Marvel fiction: a small army of loser super-villains who are barely recognizable, all of whom are brutal thugs who want to kill, maim and have no morals.  This issue gives us Chemistro, The Wrecker and Centurious as figureheads, but we’ve seen this same big, dumb idea multiple times in Avengers, in The Hood, and it always makes me feel gross after reading it.  The big change is that this Army Of Jerks has decided that, after beating Doom and forcing him to flee, they’re going to take over Latveria and get rich off a whole country.  The other parts of the story work better for me, with Doom being humbled, Amanda kicked ass and Riri outsmarting a lower-tier mutant mercenary, and the moment where Mary Jane Watson makes all the difference with a little chutzpah, her celebrity status and a can of mace is a very cool, very Bendis moment, and the use of Caselli’s art on Ironheart’s chapters and Maleev (the artist on ‘Infamous Iron Man’, Doom’s solo book) handling Victor’s chapters works really well, with the differing art styles also serving as a visual cue for the different themes of their stories.

THE BOTTOM LINE: FEELS LIKE WE’RE BUILDING TO A BIG WRAP-UP

With #600 (that is not actually, really #600) quickly approaching, and Bendis exiting Marvel Comics, this book feels like we’re on the cusp of a big, blowout finale chapter, which will theoretically return the players to first positions for the next Iron Man writer.  My biggest hope, based on the respectful use of Ironheart thus far, is that she will remain in play, and while I still don’t know what, exactly happened to Tony Stark, I’m interested in seeing how his return plays out.  In short, Invincible Iron Man #594 is a good, solid middle chapter, earning 3.5 out of 5 stars overall.  This book is successful in not only making me want to know what’s next, but also to go back and find out what I missed.