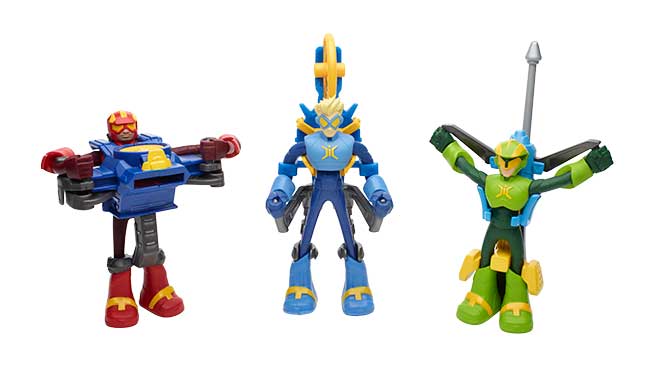 Hasbro and Netflix have teamed for a new Stretch Armstrong and the Flex Fighers animated series, and the toy company has new figures on the way as well.

Here are the action figures coming our way:

Each Flex Power Heroes figure has accessories and a signature action.  The three core Flex Power Heroes (Stretch Armstrong, Omni-Mass, and Wingspan) have flexible bodies that allow them to “power” their Flex Power gear, enabling them to streeetch, release, and launch discs and missiles.  Stretch Monster throws boulders, while Quick Charge and the ultra-mysterious and ninja-like Blind Strike each have flexible projectiles that launch from their unique accessories.  It’s flextastic fun!

Each Flex Power Vehicle comes with a unique vehicle powered by streeeetch action provided by the Flex Power hero.  Just strap the character in, pull back to activate, and release the power of flexibility.  Stretch Armstrong’s FLEXYCLE zooms across the floor, while Omni-Mass SMASHCYCLE can pound enemies into submission. It’s flextastic fun!

The Flex Power Mobile HQ comes with a Stretch Armstrong figure and a whole lot of flextastic action that can be activated in and around the vehicle.  By putting the figure into position, kids can streeetch and release to activate the boulder-launcher on the top of the vehicle, the removable disc launcher in the cockpit, or practice their targeting ability on the flip-down doors.

While we don’t have a release date on the action figures, they do look rather interesting. These are also only available at Wal-mart What are your thoughts on these figures?