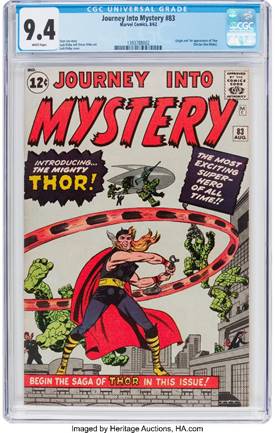 Heritage Auctions has released an update regarding its Comics & Comic Art Auction from earlier this month. Fourteen comics went for over $100,000 pushing the total for the auction to $8.75 million.

“To have 14 books each realize more than $100,000 is extraordinary,” Heritage Auctions Comics & Comic Art Director of Operations Barry Sandoval said. “The performance of these lots shows that the demand is there for exceptional, high-end comics. Our bidders went after books of the highest quality and collectible value, and they got them.” Showcase #4 The Flash (DC, 1956) CGC VF+ 8.5 White Pages is a sparkling copy that drew more bids (22) than any other among the top 10 lots, ultimately drawing a return of $155,350. The sale came in the same week as the Flash’s silver screen debut in Justice League. The issue marked the launch of the Silver Age of Comics when DC updated one of its most popular superheroes from the Golden Age and assigned Carmine Infantino, who had been the Golden Age’s Flash artist when the speedster was seen last in 1949. The issue is ranked No. 4 on Overstreet’s “Top 50 Silver Age Comics” list and has enjoyed a recent resurgence in collector demand.

That is a lot of money for comics, but considering the collector market for comics has skyrocketed over the last ten years, I expect these numbers to be surpassed during the next Heritage Auctions comic book event.