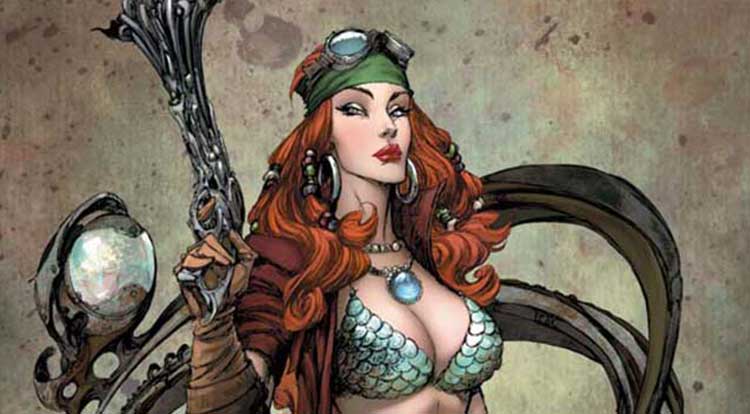 Legenderry, the steampunk world created by Bill Willingham, returns in 2018, with Legenderry: Red Sonja #1 by Marc Andreyko and Igor Lima.

Legenderry: A Steampunk Adventure debuted on December 31st, 2013, and introduced readers to a parallel universe where Dynamite Entertainment’s characters lived in a steampunk world.  I can’t believe it is has been four years since the series debut, but time flies when you are having fun with a dynamic series.

The last we saw of Red Sonja of the Legenderry world, she was living the pirate’s life aboard her ship, The Nautilus. But times have changed. As she tries to rebuild her life once again, she must save the Big City from two houses divided and the star-crossed love bringing them to the brink of war!

Writer Marc Andreyko said in a press release, “I couldn’t have been more thrilled when the Dynamite folks asked me to do a second turn in the world of Legenderry Red Sonja! Steampunk, pirates, wizards, and one of the most unexpected guest stars of all time make this a second helping that I hope everyone eats up!”

Legenderry: Red Sonja #1 is scheduled to arrive in February 2018.