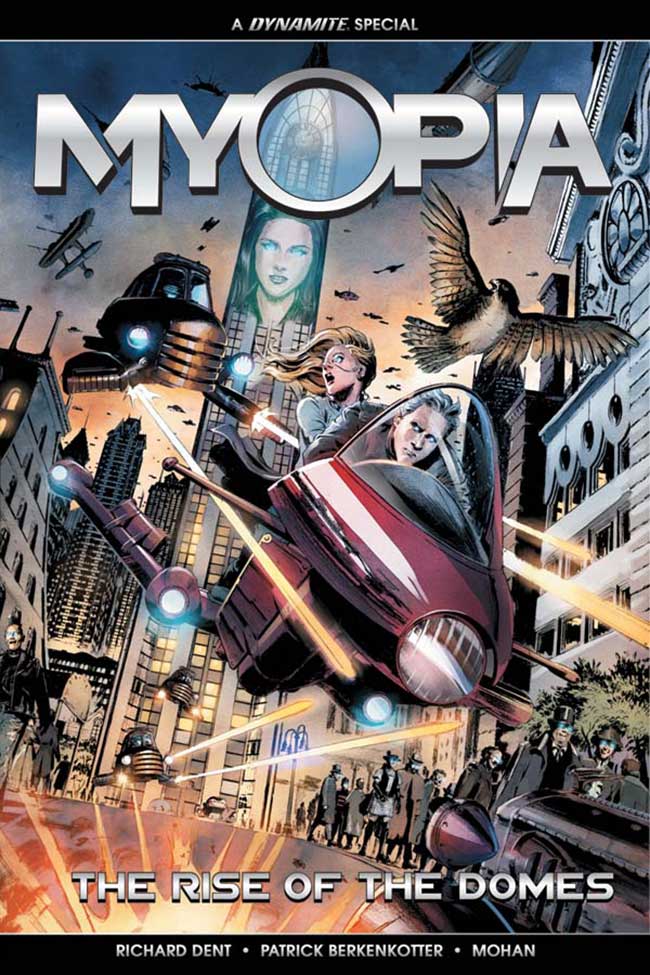 Following the successful launch of 2016’s stylistic steampunk thriller, Myopia#1, Dynamite Entertainment, writer Richard Dent, and artist Patrick Berkenkotter have once again partnered to bring fans the next entry into the futuristic science-fiction universe with Myopia: Rise of the Domes, a 30-page special set for release in February 2018!

In this second installment, the stakes are raised as the government decodes more of the virus that has been planted in the mysterious domes discovered at the magnetic poles. This leads to Ledge betraying Molly’s trust and placing Matthew’s psychological health in danger. Meanwhile the mysterious James Chase begins his first day of work at the invasive Formula Media Corporation where he meets Jill, the executive Formula Media Assistant who processes all the psychic imprints connected to the Central Lens Network.

Writer Richard Dent says, “I’m so excited to be working on the next issue of Myopia with Dynamite. The slow build of the first issue begins to break into an exciting pace and is just going to get faster from there!”

Richard Dent is a Creative Writing teacher through the National University MFA program, whose own poems and short stories have been widely published in a number of outlets and journals. His original version of Myopia (in screenplay form) was selected as a finalist in the Francis Ford Coppola Screenwriting Competition and the Austin Film Festival Screenwriting Competition.

“I was blown away by Richard’s concept for Myopia #1, as well as by both fan’s and critic’s reactions to the incredibly unique and visionary tale,” says Dynamite CEO and Publisher, Nick Barrucci. “So, we knew we would have another hit on our hands with Richard’s follow-up, Myopia: Rise of the Domes. Fans of the first issue won’t want to miss the next chapter of this spectacular steampunk thriller!”

Based on an award-winning story, Myopia originally migrated to Dynamite in 2016 after a successful Kickstarter supported by the likes of George R.R. Martin, Margaret Atwood, Dean Koontz and Jim Butcher. Myopia #1 received a 9.0 on Comic Book Round Up score, and was reviewed in international, award winning magazines such as River Styx, which publishes some of the most important writers of our time, including many Pulitzer Prize and National Book Award winners.