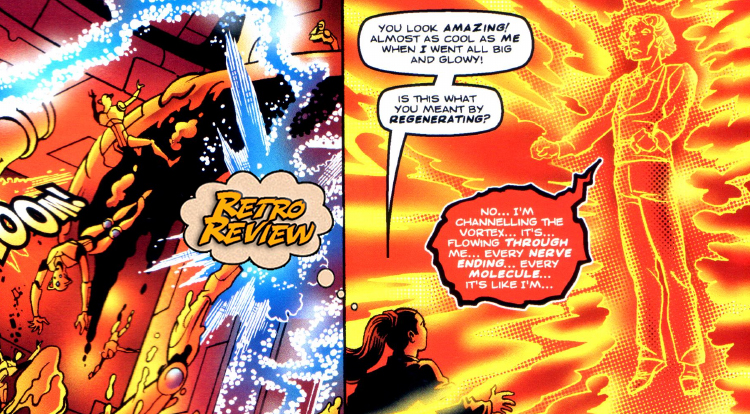 The great thing about Doctor Who is, canon is in the eye of the beholder.  This makes for interesting moments as we go, including multiple introductions, multiple versions of history…  and multiple endings.  Your Major Spoilers (Retro) Review of Doctor Who Magazine #353 awaits! Previously in Doctor Who Magazine: Only seen once on television, in a 1996 America co-produced movie after the BBC’s cancellation of Doctor Who, The Eight Doctor nonetheless had the longest and most eventful tenure of any of the incarnations of the Time Lord sometimes called Theta Sigma.  Traveling with his companion Destriianatos (a dangerous, snake-like alien who had started as an antagonist but slowly become a trustworthy companion), The Doctor encountered some of the most advanced Cybermen to date, who were able to almost outmaneuver him.  During a final confrontation with the Cyber-Controller, Eight pulled a surprise move, denying the Cybermen access to the secrets of time travel…

…by making a suicidal swan dive into their space/time vortex. Destrii’s rage at the remaining Cybermen is a testament to her character growth (she had started out nigh-immortal, obnoxious and capriciously cruel), but before she can be “deleted”, the Vortex rises up to remind them that a Time Lord is a very fine creature, and mightily hard to kill… I love, love, LOVE the coloring in this episode, emulating the best of CGI digital effects without all the “aging badly” that the Matrix and other fin de siècle science fiction run into more than a decade later.  None of the Doctors has ever been a pushover, but empowered by the time winds themselves, Eight makes it clear to the newest doomed-est incarnation of the machine empire why you don’t play with the fundamental forces of the universe… It’s kind of a shocking moment, to be honest, but one that I can totally hear the final orchestral scores from ‘Heavy Metal’ during, as the Eight Doctor wipes out his enemies in a show of sheer power.  Then, realizing that Earth is still in danger from the Cyber-attacks, he takes a moment to speak directly into the minds of every living person on the planet…

It’s remarkable how well this story (which, you have to remember, predates ALL of modern ‘DW’, from Rose as ‘Bad Wolf’ to ‘Day Of The Doctor’ to Ten’s righteous fury on Mars”) fits in with the modern television stories that followed it.  (More than followed, actually, as this story was created specifically BECAUSE of them, but we’ll get to that in a moment…) As his consciousness expands to infinity, seeing/feeling everything that ever happened, all at once, The Doctor is unaware of the Cyberman platform disintegrating beneath him.  Believing that the universe is once and truly safe, and that he can pass on to a greater realm, it is the end for The Doctor…

…until Destrii cries out for his help, as so many have before. The original Eighth Doctor costume was a little iffy for me, and the wig was both odd and, reputedly, uncomfortable for Paul McGann, but this story makes him look awesome, with his cool waistcoat presaging the nerdy finery that would define The Eleventh Doctor, while his heroic efforts to save his dearest friend are clearly the same things that would define and doom The Ninth Doctor. Moments before the explosion, The Doctor and Destrii find the TARDIS and make good their escape, but this story doesn’t end like so many of the DWM strips before it had.  There is no hook for “next time”, no expectation that we’d see our friends return.  Instead, we find The Doctor and Destrii discussing what has happened and how, sometimes, you find yourself forcing to deal with change… “Change hurts”, says The Eighth Doctor, and truer words have seldom been spoken… As he contemplates the possibility of a Doctor in a leather jacket, Eight and Destrii realize that they have no idea where they are.  Setting off over the hill, he remarks that literally ANYTHING could be on the other side, and sets off towards the newly created sunset.

If you’re aware of the timeframe of this story, you know that, in 2005, Doctor Who Magazine was at the end of a long cycle of being the main ‘DW’ material available.  The new show was about to debut, and the BBC had commissioned a new set of comic adventures featuring their shiny new Christopher Eccleston Doctor, which explains the finality in this strange little tale.  The creators have said that they were not allowed to do a regeneration story in this strip, and were not allowed to keep Destrii around as a transition point to the new Doctor, as was the strips custom dating back decades, as the BBC wanted Nine and Rose stories without complicating the continuity.  A decade later, we would find that there is an entire missing incarnation between this Doctor and the first modern Doctor, but all that is in the future, and Doctor Who Magazine #353 is in the relative present, with a beautifully drawn and exquisitely covered story that wraps up a fascinating tributary of The Doctor’s life, earning 4 out of 5 stars overall.  Until 2013, this was the closest thing that Eight had to an official ending, and it’s a story worth knowing about and holding onto as maybe-sorta-probably having happened, somewhere out in the universe…