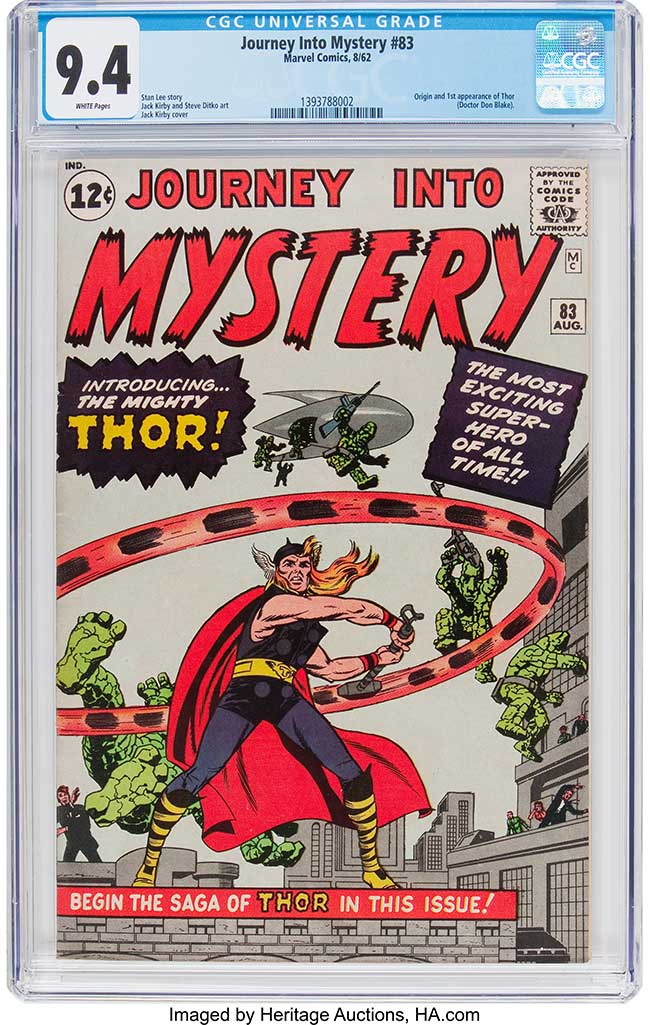 Douglas Schmell of pedigreecomics.com has consigned his personal collection of comics to Heritage Auctions. Along with the other comics on the auction block November 16th-18th, Heritage Auctions will have $3.9 million in comics books for some lucky bidders.

The top lot might well be Tales of Suspense #39 (Marvel, 1963) CBCS NM+ 9.6 white pages. The origin and first appearance of Iron Man makes this a coveted issue and pushed it to No. 8 on Overstreet’s “Top 50 Silver Age Comics” list. The fourth-most valuable Marvel Silver Age comic, this copy of Journey Into Mystery #83 (Marvel, 1962) CGC NM 9.4 white pages from the pedigreecomics.com Collection has the second-highest grade ever offered by Heritage. The origin and first appearance of Thor should remain in high demand given the success of the current Thor: Ragnarok movie. Also from the Schmell collection, Showcase #22 Green Lantern (DC, 1959) CGC NM- 9.2 cream to off-white pages, is one of the most remarkable Silver Age DCs ever offered through Heritage, as this is the highest-graded copy of the origin and first appearance of the Silver Age Green Lantern, Hal Jordan. This copy of Showcase #4 The Flash (DC, 1956) CGC VF+ 8.5, from the pedigreecomics.com Collection, is an exceptional copy with white pages. This issue is ranked No. 4 in Overstreet’s “Top 50 Silver Age Comics” list and has enjoyed enough of a surge in collector demand that it could climb up a spot on Overstreet’s next ranking. Not only does the Flash have multiple TV seasons to his credit in the meantime, he also is featured in trailers for the upcoming Justice League movie. Fantastic Four #1 (Marvel, 1961) CGC VF/NM 9.0 off-white to white pages has the second-highest grade of all copies ever offered by Heritage. No. 3 on the current Overstreet’s “Top 50 Silver Age Comics” list, Fantastic Four #1 launched the Marvel Age in 1951, paving the way for Spider-Man, Iron Man, Thor, the Hulk and several other superheroes. This issue is the origin and first appearance of the Fantastic Four – Marvel’s first superhero team – by writer Stan Lee and artist Jack Kirby. Detective Comics #33 (DC, 1939) CGC VF 8.0 cream to off-white pages carries an uncommonly high grade on one of the Golden Age’s top comics. No. 16 on Overstreet’s 2017 “Top 100 Golden Age Comics” list, Batman makes his fourth cover appearance on the issue in which his origin is described. Cover art is done by Bob Kane; Fred Guardineer, Kane and Sheldon Moldoff provide the story art. Other top lots include, but are not limited to:

This is a massive collection, and I’m drooling over the thought of having any one of these in my collection. Now I just need the Universe to send me $10 million so I can buy some of these next weekend.