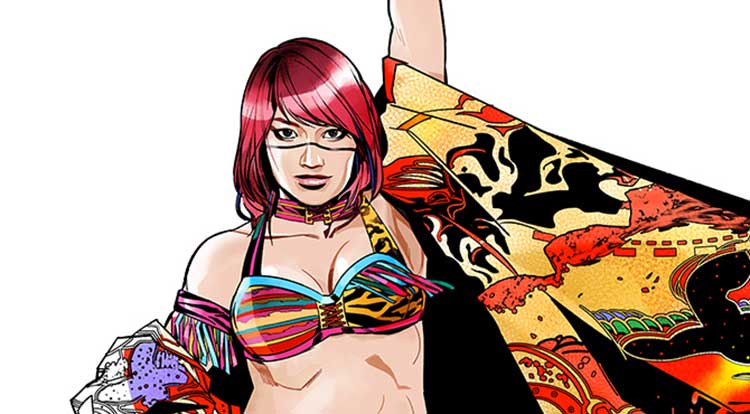 “My story follows Asuka from her debut in NXT to RAW where she is today,” says writer Tini Howard. “I can’t help but love Asuka—she’s a larger-than-life character that has captivated the WWE Universe around the world.”

As previously announced, WWE #14 kicks off an all-new storyline by writer Dennis Hopeless and artist Serg Acuña revealing the truth behind the groundbreaking Women’s Evolution, taking readers behind the scenes of the rise of WWE Superstars Charlotte Flair, Sasha Banks, Becky Lynch, and Bayley. The Asuka bonus story will be included in issue #14 and continue in issues #15, #16, and #17. Artist Hyeonjin Kim says, “Nobody is ready for Asuka—in the ring, no one can match the powerful ‘Empress of Tomorrow.’ It’s a thrilling experience to be able to draw her sheer force on paper. I hope the readers can feel the action.”

“It’s been a long time since we’ve seen a Superstar start their career with an undefeated streak that spanned over one hundred matches,” says Chris Rosa, Associate Editor, BOOM! Studios. “Once Asuka’s debut on the Monday Night RAWroster was announced for TLC, it was clear the time was now to tell her story, and Tini and Hyeonjin are the perfect team to do it.”

Print copies of WWE #14 will be available for sale in February 2018 at local comic book shops (use comicshoplocator.com to find the nearest one) or at the BOOM! Studios webstore. Digital copies can be purchased from content providers, including comiXology, iBooks, Google Play, and the BOOM! Studios app.