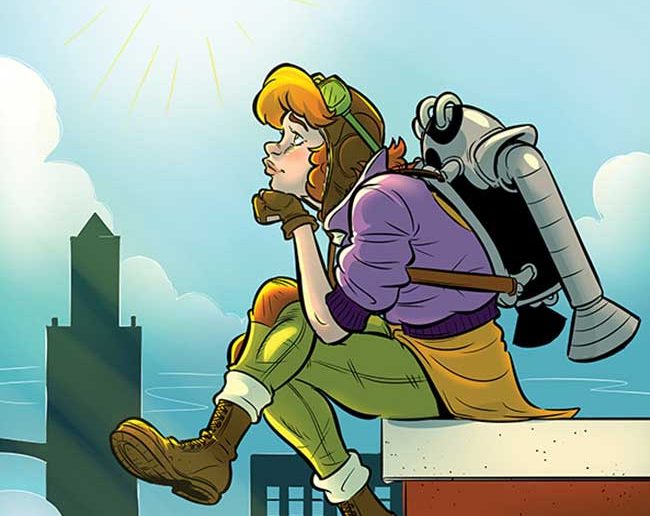 Everything has lead to this. The future of New York City…and the Actionverse…is at stake. Even backed up by Midnight Tiger and a who’s who of heroes, will it be enough to stop the Intolerance? After this, EVERYTHING CHANGES! Also: A new Sword of the Blue Scarab story by Jay Piscopo! As a rookie QB takes the helm for the Tennessee Boxers during the biggest game of the season, injured starting QB Terrance Wright is in the locker room, contemplating a decision to get back on the field that could possibly end up permanently damaging his body and career. Will the Boxers come from behind to defeat the Skyhawks? And what secret is Terrance’s girlfriend, Cassie hiding from him? Watch the drama unfold at Supreme Bowl XXVII in the epic conclusion of FORCE! Cover by artist Trevor Fraley! Jack McGriskin, cranky, super-strong private eye, is back in an all-new one-shot! One of Jack’s oldest foes, Monkey Business, has finally been caught red-handed, but when his trial turns into a circus, Monkey Business goes on a murderous rampage! It’s up to Jack to bring the sinister simian to heel – but when things go from bad to horrific, is Jack up to the challenge posed by a super-human with nothing to lose? Teenage hero Jupiter Jet must push her jetpack to the limit in order to outrun the villainous Praetor Pluto who is hot on her heels! But will a new invention built by her brother Chuck help Jupiter Jet’s mission or harm it? Juleka has always suffered from the “class picture day curse.” This year, Marinette has decided to help her break the curse. But she hadn’t taken Chloe into account. Excluded from the picture, Juleka gets akumatized and turns into Reflekta, determined to do everything for people to notice her, for a change, and turning everyone in her image, including Cat Noir! There’s only one superheroine left to save Paris: Ladybug! Ladybug and Cat Noir return to their civilian and superhero lives in Paris. But the aftermath of their fight in New York City with the Trash Krakken continues to affect them as they search for answers. Has the threat really been put to rest or is there something more sinister lurking on the horizon? The battle is over, but our crew is changed forever. Some of our crew is injured, some is shaken, some are gone. Now it’s time for the crew to gather what’s left and decide where to go from here. Follow Quinn and Zoe as they work to pull everybody back together and continue their quest, if they can. Action, Adventure and comedy await, as Sami the samurai squirrel and friends embark on a quest to solve a mystery that’s been haunting the village of Woodbriar for years. A hooded ghost named Visper has been watching Sami from the shadows. Who is Visper? What does he want? Join the fun, as Sami encounters ninja monkeys, hungry pirates and a cranky Cyber-Yeti in this action-packed series from creator Scoot McMahon. IT’S STEEL VERSES LIGHTNING IN THE SECOND CHAPTER OF THE NINJA PRINCESS SAGA! After the capture and narrow escape of fourteen year old ninja-in-training, Shainndrea, the Toshigawa Ninja Clan has been forced to move to a new secret base further on the outskirts of Osaka. The evil Red Dragon has taken leadership of the rival Azumi Ninja Clan and is determined to fulfill the contract to capture Shianndrea at any and all costs. Now, with her new commanders in place, the stage is set for the Red Dragon to reveal her most powerful Oni yet, Yawata, the embodiment of war with the powers of lightning. However, Yawata has his own agenda and capture is the furthest from his mind. An accident in Home Rec means a trip into town for Trixie and friends. When Minky reveals she’s never seen humans before, the gang tries to introduce her to their culture…but can the human world make a good impression on this skeptical mermaid?