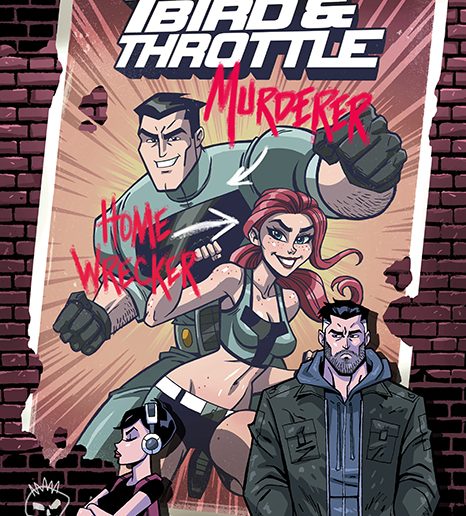 Josh Howard, the creator of Dead@17, has launched a new Kickstarter campaign for his sci-fi superhero comic series, T-Bird & Throttle.

T-BIRD & THROTTLE comes to Kickstarter with its first 48 page double-sized issue. Nearly 20 years in the making, the series follows family man and former astronaut Mitchell Maddox. After a strange encounter on the moon transformed him into something more than human, Maddox was propelled to the status of “super-hero.” Taking the moniker T-BIRD, he used his abilities for the good and protection of the people of Centennial City until the day a terrible tragedy changed everything. T-BIRD & THROTTLE is about a hero’s fall from grace and his subsequent attempt to rebuild his life and raise a daughter in changing times.

The last time I heard about this series was in 2008, with the release of the first issue, but nothing further came from that. It looks like this Kickstarter campaign will attempt to make it bigger and better than before.

“I’m very excited about this opportunity to finally bring this series to life. T-BIRD & THROTTLE is my passion project, and I can’t wait to share it with the world,” said creator Josh Howard. You can find more information about the Kickstarter at https://www.kickstarter.com/projects/1499444798/t-bird-and-throttle-1-a-new-comic-from-creator-jos

Dead@17 Josh Howard kickstarter t-bird and throttle
Share. Twitter Facebook Pinterest LinkedIn Tumblr Email
Previous Article[Movies] Scooby-Doo and Batman are the Brave and the Bold in new animated movie
Next Article [Solicitations] Tegan and Sara team up with The Archies