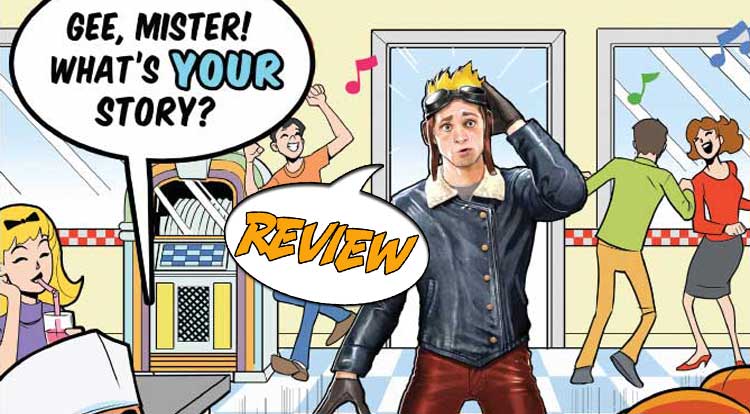 Cannonball has been lost in space, seemingly never to be seen again.  When this happened last time, he got a girlfriend out of it, wanna see what happens time ’round?  Your Major Spoilers review of U.S. Avengers #11 awaits! Previously in U.S. Avengers: “During a battle to protect Earth from a Chitauri invasion, Cannonball was lost in space and presumed dead.  But, according to his partner Izzy Kane, AKA Smasher, he’s still alive somewhere, and she’s enlisted his teammates to help her find him.

And Smasher is right — after the battle, Cannonball was scooped up by space slavers and found himself in Glenbrook, USA, an all-American small town…  on another planet!  But all is not what it seems…

We open on another beautiful day in Glenbrook, as Sam Guthrie is being shown around town by his wealthy patron, who is clearly NOT Hiram Lodge.  Sam is confused, but quickly finds that he has been sold to one Ritchie Redwood, who rules the town with an iron fist, and ensures that everyone stay “in-character” at all times, to the point where Sam is forced to wear a corduroy suit and become the town’s new geography teacher.  Perhaps the best moment in the entire issue comes when, after being explained what is going on and ordered to stay right where he is, Cannonball triggers his blasting powers and rockets away with an exasperated “Damn shenanigans, I swear.”  At the same time, his friends have been picked up by the Shi’ar empire, led by Smasher, and are on their way to pick up their lost mutant pal, only to get attacked by 30’s mobsters.  In space.  With robots in pin-stripe suits…

Have I mentioned that I love this book?

THE MOST ENTERTAINING AVENGERS BOOK

Al Ewing has a way of making even the oddest of oddballs perfectly relatable, getting to the core of their character, no matter how much strangeness has happened in the Marvel Universe.  Thus, we find Sam Guthrie, Kentucky farm boy, completely nonplussed by an alien settlement, since he’s been dealing with aliens, space and such falderol since he was sixteen years old.  Squirrel Girl engages mobsters with space-roadsters with glee, Red Hulk refuses to accept his weaknesses, Smasher is utterly focused on finding her guy…  Everyone in this issue is perfectly characterized, especially young Master Redwood, who’s obsession with fitting in on Earth gets a new twist thanks the last page reveal of his old friend Bugface Brown, putting the entire plot in a larger perspective.  Paco Diaz is a wonderful artist, giving us ersatz-Archie characters alongside heroic Avengers and clearly having a lot of fun with the layouts and storytelling, especially when Biff shows his shape-shifting hand to meet Cannonball in combat…

With its meta-explanation of why Riverdale has been the same since 1940, a plot hinged on a friendship established in 30-year-old issues of New Mutants and a really diverse, fun cast of players, U.S. Avengers #11 is a real winner, with a fun plot and the promise of more action, adventure and a reunited romance to come, really hitting the comic book spot for a top-notch 4 out of 5 stars overall.  If you’re not reading U.S. Avengers, you’re missing out on a really great book…

A clever story full of detail, exuberance, character and fun. Well worth your four bucks...