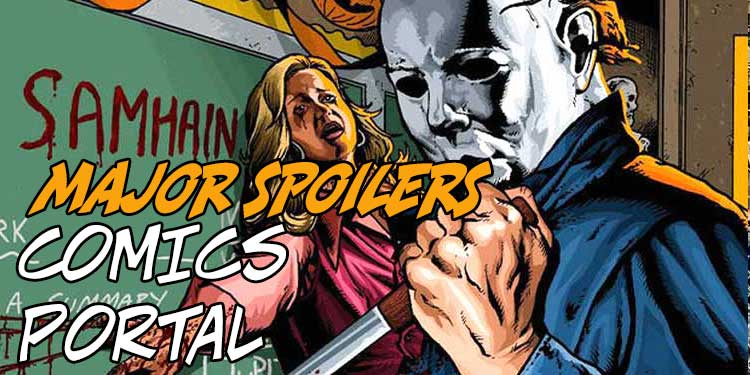 COMICS PORTAL: They Were Horrors!

It’s only a few days until Halloween … tomorrow night, in fact! I just returned from a horror-themed convention named Spooky Empire, held in the Orlando area.

All this made me think about the role of horror in the comics industry. I have to say … it’s a pretty big one!

HOW WAS SPOOKY EMPIRE? Once again, I was helping behind the table with Richard Rivera and his Stabbity Bunny comic. Since this con was local for us, we saved costs by commuting from home rather than staying in a hotel and having to travel a long distance.

Spooky Empire is not much of a comic con… and the folks who attend prefer it that way! Granted, there were a few comics creators besides us there, but since this is a horror con, there were a great many more black shirts, black outfits, tattoos and other Halloween-like things than you’d find at a comic con.

Since I’d met the comics folks previously, I struck out when it came to finding new comics (I bought only one) and in finding people to interview for my podcast. Oh, well!

Financially, many of the dealers there were satisfied with the money they made, although they’d always like to make more, I’m sure! We recouped our expenses and made a little extra, so that’s always a win for us!

Many of us noted how clean the hotel was, including the bathrooms and the common areas. Very nice!

I do have a few suggestions on how to improve this con. Next time, the volume on the person using the overhead speakers should be turned down. Many of us found ourselves yelling at each other, which made selling things and understanding each other tough at times. Less volume next time, please?

Also, accessibility of food was a struggle. There were a couple of coffee shops and a restaurant in the convention center, but we often had to take a vehicle out of the parking garage to find sustenance. And those coffee shops were often bought out of food a few hours into the day.

It was also interesting that they expanded the Friday hours. We were there from 1 p.m. (noon, if you include VIPs) until 11 p.m. The next day was 11 a.m. (10 a.m. for VIPs) until 8 p.m. Sunday was the same starting time, but ending at 5 p.m. I was so ready to sleep after we finished up that final day! I understand they sold a lot of Friday tickets on Friday the 13th, but a lot of folks didn’t get the word that the con opening shifted from 4 p.m. to 1 p.m. If you’re going to do that, I’d recommend getting the word out a lot sooner!

HORROR IS THE STAPLE OF THE ‘OTHER’ COMICS COMPANIES I’ve saved this year’s DC House of Horror #1 to read on Halloween night, but both Marvel and DC are said to be the kings of superheroes. In fact, so much so that the genre is said to be exhausted and running on fumes. (I don’t know if I buy that, by the way.)

If you don’t make a superhero comic then, what’s a company to do? Most of the time, it seems they turn to horror.

It would take many columns to even begin to scratch the surface of listing the horror titles that have come out over the years. Just look around your local comics shops in the “other” comics companies, and you’ll see plenty of them.

Probably the best-known comic right now is Robert Kirkman’s The Walking Dead. It’s become successful on TV as well, of course, and it seems to be the gold standard when it comes to horror.

Zombies (or “walkers,” as TWD refers to them as) continue to thrive. Of course, vampires and werewolves remain popular, but the bloodsuckers aren’t quite as big as they used to be. Of course, they got a lot of attention in recent movies and TV as well, so it only makes sense that they’re less the focus of horror than they used to be.

I’ve been intrigued by how many horror/suspense stories are now combined with other types of storytelling. Sci-fi is a big mashup with horror these days, much like the film Alien. It’s fascinating to me that Mr. Kirkman pitched The Walking Dead with aliens in it so Image would be more interested in it. Boy, were they surprised when the first few issues came out! At least, that’s what the rumors say!

There have been Westerns with vampires and the like as well. That kind of story always gets my attention as well.

However, I have come across some “purists” who think horror should just be horror… that it should only be told in the ways it had before recent mashups. You know, older European castles or inner-city locales.

I think that new locations and situations bring things to a new light, opening up all kinds of new situations. Is that always the case? No, but I think horror is ready for new ways to tell those kinds of stories.

Because I was busy with Spooky Empire, I didn’t get the chance to participate in Halloween Comicfest, sadly. But I hear good things about the 2017 version of this event.

It continues to be on the rise, and that’s a good thing. Many more comics shops participated by distributing free comics and hosting cosplay contests. One store even extended it to Sunday, so it ran the entire weekend!

Is it up to Free Comic Book Day levels? Not yet. But I hope in the coming years, it will be!

So both Spooky Empire and Halloween Comicfest were horrors… in a good way!

What do you think? Should horror keep to the tried and true avenues of storytelling? Or should new mashups be tried? And how did Halloween Comicfest go this past weekend, if you got to attend? Whatever your opinion or report, please share your thoughts in the space below! And have a Happy Halloween tomorrow!