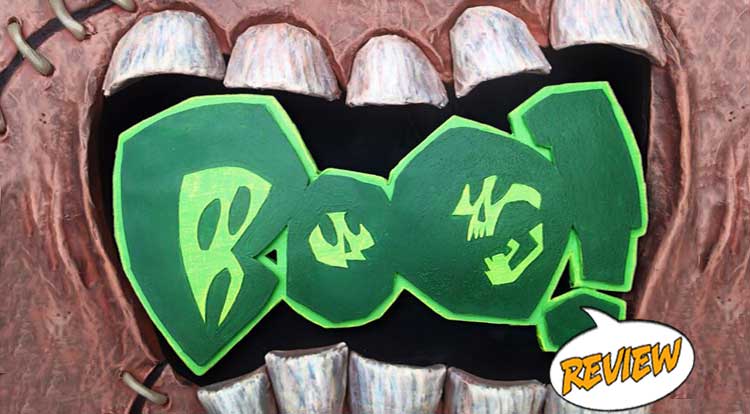 Previously in BOO! Halloween Stories: “BOO! HALLOWEEN STORIES began in 2001 as a collaboration between cartoonists Manning Krull and Calamity Jon Morris. In the years which followed, it evolved into an online collaboration between dozens of creators from the farthest corners of the internet. In 2013, the book went digital, appearing as part of Monkeybrain Comics’ exclusive catalog of downloadable titles on Comixology. Since then, it has been resurrected every year, including for a Holiday Special in 2014.”

Among the vast ocean of things that I wish would get more respect and be utilized more often in modern comic bookery: Anthologies and horror titles.  Fortunately, this book is here to give me my annual dose of both.  With so much to offer, it’s almost an embarrassment of riches in these pages.  The first tale, ‘Mhairi’, by Weiss and Butler is the perfect opening tale, combining horror, humor and urban legend in a truly chilling, yet funny chunk of storytelling.  Paul Milligan’s ‘Year Zero’ is visually fascinating stuff, though I got a bit lost in the story, followed up by ‘The Long Shadow Road’, a traditional but effective story by Krach and Seames.  ‘Damnatio Memoriae’ by Lowery & McGuan feels like an excellent lost episode of ‘Tales Of The Unexpected’, while Pierce & Krull’s ‘War Of The Fleas’ evokes a particular 80s ‘Twilight Zone’ episode in all the right ways. Smigiel’s ‘Watermelon Valley’ is a haunting story, perhaps the best of this lovely bunch, excellently done.  Smith’s ‘OLD NICK SCRATCH’S MARIONETTE THEATRE PROUDLY PRESENTS…’ is horrifying, Deordio & Hunter’s ‘Good To Be Back’ is weirdly touching while ‘Closet’, by Kelly Tindall is flat-out wonderful horror.  Todd & Digges ‘Drain The Swamp’ provides relief from the endless horror of the news, while Toms’ ‘A Slight Incline’ makes the mundane terrifying.  ‘Crudzo The Sewer Clown Vs. Scabra Cadabra’ from Winkeler & Anderson combines funny and gross, Faulkner’s ‘Slash Fiction’ is subtle in its murderous ways, and ‘La Chupasoymilk’ by Esquivel and Macropolous is the perfect final cherry on the Halloweeny sundae…

I LOVE A GOOD ANTHOLOGY BOOK

Of special note is Cereno & Knigge’s ‘The Alphabet Of Monster’, an utterly perfect bit of comics in the form of a nursery rhyme, featuring the most memorable monsters of movie history, a story for which I would frankly pay the cover price for, all by itself.  There are no weak links to be had here, amazingly, and this issue is excellently curated, taking you from the scary to the campy to the Trumpy and back, and never dropping the ball.  As an annual Halloween book, it’s a strong argument for the kind of thick quarterly anthology comics that are taken for granted in other countries, and I’d frankly rather get this comic or one like it four times a year than 12 mediocre monthly issues any day.  This issue tackles the hardest question fo all: “What is really scary?”  Whether your answer is isolation, monsters, the great beyond or current events, there’s something in this issue to tickle your Halloween fancy…

THE BOTTOM LINE: A REALLY WELL-BALANCED WALL OF COMICS

You can’t beat 76 pages of comics for $1.99, but when the book is this well-done, featuring so many different kinds of macabre Halloween fun, it’s what we at Major Spoilers call ‘Rush Right Out In A Buying Frenzy’ time.  Boo! Halloween Stories 2017 is the real deal, with page after page of excellent stuff, capped byand the utterly perfect ‘Alphabet’, earning a well-deserved 5 out of 5 stars overall.  This one’s a winner, guys…