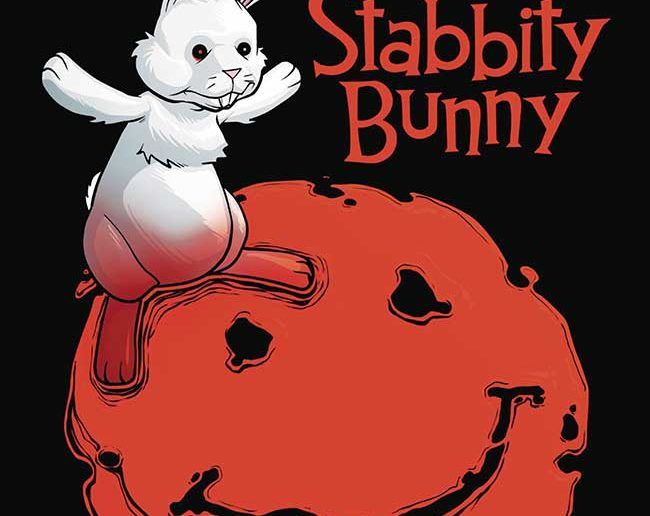 Seven-year-old Grace, still clutching her adorable plush bunny, is kidnapped by supernatural forces that have been hunting her family for generations. She awakens in a shack on the outskirts of town, and for the first time in her life, the little girl can’t sense her mother’s presence. Her captor knows the family’s secrets, and that link has been severed. When her escape attempt fails, it seems there will be deadly consequences, but an unlikely protector intervenes. It’s a big mistake to kidnap a child with a plush toy named Stabbity Bunny!

Richard Rivera, creator and writer assembled the team of Dwayne Biddix, artist, Liezl Buenaventura, color artist, Jaymes Reed, letterer, and Wayne Hall, editor. The title has been available at comic conventions and online at stabbitybunny.com since 2015, but this year at San Diego Comic-Con, Scout Comics announced they would be adding the title to their lineup.
“It’s a dream come true to have Stabbity Bunny available in comics shops around the world,” said Rivera. “I’m excited to be working with Dwayne and Liezl as we tell this story about Grace, her family and a great cast of characters.”

“Stabbity Bunny is unique storytelling the way we like it,” said James Pruett, Publisher at Scout Comics. “The stories we’re telling about everyday people dealing with extreme situations—always with a dark twist—is hard to find in comics these days. We’re really excited to welcome Stabbity Bunny to the Scout family and know that once you read it, you’ll be hooked.”

Coining the phrase ”cuddly horror,” Stabbity Bunny is a blend of the terrifying and the heartfelt. Readers have said the stories could take place at the intersection of Nightmare on Elm Street and Sesame Street, and the title has attracted over 10,000 followers on Facebook.

Stores will be finalizing their orders for issue one on November 18th. Everyone is encouraged to contact his or her local comic shop for details and to order a copy under item #NOV171863. The first issue is scheduled to hit the shelves on January 31st, 2018.