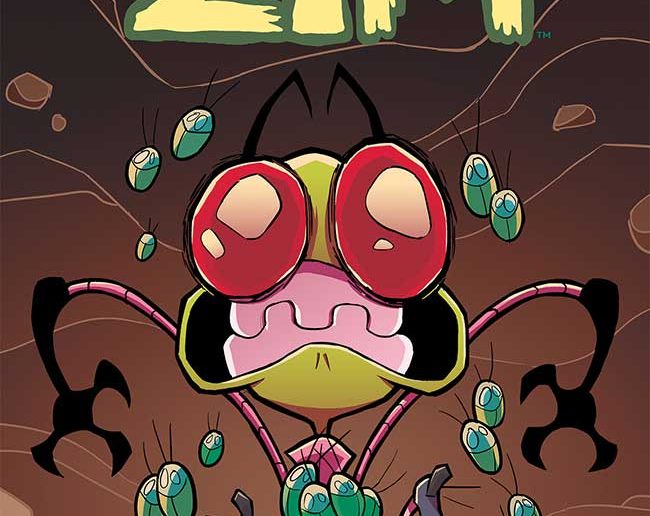 SCI-FU
YEHUDI MERCADO (W/A/C/CA)
Part-Time Grim Reaper. Full-Time Cutie!
Hip-hop, sci-fi and kung fu all hit the turntables for the mash-up mix of the year! Cartoonist/force of nature Yehudi Mercado (Pantalones, TX, Rocket Salvage) sets his sights on 1980s Brooklyn and Wax, a young mix-master who scratches the perfect beat and accidentally summons a UFO that transports his family, best friend, and current crush to the robot-dominated planet of Discopia. Now, Wax and his crew must master the intergalactic musical martial art of Sci-Fu to fight the power and save Earth. Word to your mother.
MARCH 14 / 144 Pages / Softcover, 6” x 9” / All Ages / $12.99 ARCHIVAL QUALITY
IVY NOELLE WEIR (W) STEENZ (A/C/CA)
After losing her job at the library, Celeste Walden starts working at the haunting Logan Museum as an archivist. But the job may not be the second chance she was hoping for, and she finds herself confronting her mental health, her relationships, and before long, her grasp on reality as she begins to dream of a young woman she’s never met, but feels strangely drawn to. Especially after she asks Cel for help…

As Cel attempts to learn more about the woman, she begins losing time, misplacing things, passing out—the job is becoming dangerous, but she can’t let go of this mysterious woman. Who is she? Why is she so fixated on Cel? And does Cel have the power to save her when she’s still trying to save herself?
MARCH 7 / 280 Pages / Softcover, 6” x 9” / Teen / $19.99 MADE MEN #5
PAUL TOBIN (W) ARJUNA SUSINI (A/CA) GONZALO DUARTE (C/CA)
Who killed Jutte Frankenstein? The closer she and her team get to finding out the truth, the more they realize that this rabbit hole goes very, very deep. The bodies are piling up and while Jutte’s got an inside man—Detective Larkin—things are unravelling fast. On the plus side, the police have found the man who murdered the chief of police. But while that’s good news for Jutte, it’s bad news for Larkin, who’s starting to find out what it’s like to be the only straight-and-narrow cop in the whole force.
JANUARY 10 / 32 Pages / Mature / $3.99 THE DAMNED #7
CULLEN BUNN (W) BRIAN HURTT (A/CA) BILL CRABTREE (C/CA)
If Eddie is already dead, why are so many people so determined to kill him? Nonstop action and mayhem dominate this issue as Eddie’s cursed brother, Morgan, has to drag Eddie’s dead and deadly corpse around town while trying to figure out why so many people are after his brother!
JANUARY 10 / 32 Pages / Mature / $3.99 INVADER ZIM #27
ERIC TRUEHEART (W) MADDIE C (A/CA) FRED C. STRESING (C/CA)
COVER B ILLUSTRATED BY DREW RAUSCH
On a search for the rare element Splodium-235, ZIM discovers that deep beneath his own base lies another alien base. And inside it is another alien. And this alien claims he took over the Earth years ago. Is he insane? More importantly, can ZIM steal his supply of Splodium-235 and get out? Or will he keep ZIM in his base forever because… well… he’s just so lonely down there?
JANUARY 10 / 32 Pages / All Ages / $3.99 INVADER ZIM, VOLUME 5 TPB
ERIC TRUEHEART (W) DAVE CROSLAND (W/A) WARREN WUCINICH (A/C/CA) FRED C. STRESING (C)
ZIM’s latest doomsday plot is foiled when GIR goes haywire and tries to kill everyone in sight! (But especially ZIM. He kinda deserves it.) Diagnostics reveal that the malfunction is due to a virus, forcing ZIM to do the one thing he never thought he’d have to—GO INSIDE GIR’S BRAIN. Where nothing works and everything is exactly at GIR’s level of nonsense. And when ZIM discovers that the virus was created and implanted by a being known only as VIROOZ from the planet Cyberflox… well hey, let’s not give away too much, alright? Just read this special 4-part story with bonus guest issue from Dave Crosland!
FEBRUARY 21 / 128 Pages / Softcover / All Ages / $19.99 Who is this secretive character? What is the acrid aroma that accompanies him wherever he goes? And why would anybody want anything to do with him? Seriously, he stinks of onions.

The Case Of The Lonely One pits Shauna WIckle against her most mystifying enemy yet, forcing her to take sides, form new alliances, and make a lot of promises that she doesn’t want to keep. Morty is on a quest to free himself (and all the other Mortys) from the clutches of Ricks, who collect Mortys and force them to battle one another for schmeckles and glory. Along the way, he’ll discover the grisly history of Morty battling, the dastardly lengths that Ricks are willing to stoop to in order to win, and perhaps… the strength in himself that’s needed to free the Mortys once and for all?
MARCH 21 / 128 Pages / Softcover / Teen, 16+ / $19.99 GUERILLAS, VOLUME 4
BRAHM REVEL (W/A/CA)
Southeast Asia, 1970. A troop of experimental chimpanzee soldiers have escaped from the U.S. Army and into the jungles of Vietnam. Despite being free from their captors, the chimps have continued to do exactly what they were trained to do… kill. But as memories of a time before the war begin to surface, the chimps are forced to question why they are fighting at all. In the thrilling finale to the series, their past finally catches up with them when they come face to face with their most fearsome enemy yet, a vengeance filled baboon named Adolf.
MARCH 21 / 240 Pages / Softcover, 6” x 9” / Mature / $19.99