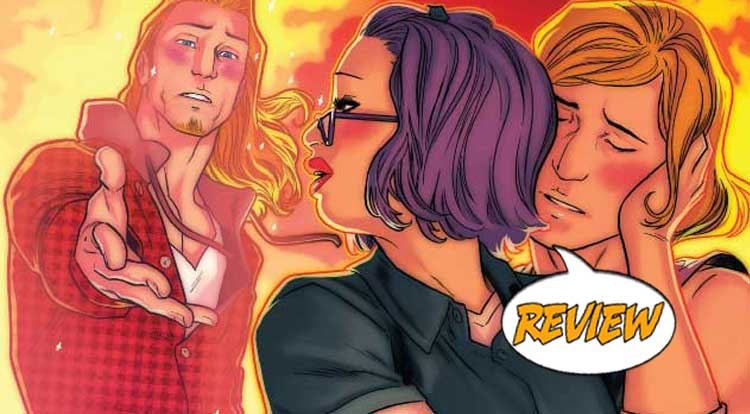 Wait, wait, wait…  Gert is back from the dead?  Your Major Spoilers review of Runaways #2 awaits! Previously in Runaways: “The RUNAWAYS are back, but are they ever, ever, ever getting back together?  Did Chase and Gert’s love survive their time apart?  Have Karolina and Nico’s feelings made their friendship impossible?  What emotional land mines lie in wait to DESTROY the Runaways?!  And should we be more worried about those, or about the shadowy scientist watching them from a distance?”

Moments after (from her perspective, anyway) being stabbed by Alex Wilder’s dad, Gertrude Yorkes opens her eyes to see the same face she saw as she died: Chase Stein.  This Chase, however, is a couple years older (which I believe makes him over 20 now?), and has used time travel to fetch her from the moment of her death, with Nico Minoru using her mystical powers to heal Gert from what should have been a fatal wound.  Gert’s response is pretty much perfect: She loudly and emphatically demands that the idiot tell her what the hell is going on, setting aside the last-second declaration of love she was in the middle of.  Nico and Chase tell her the sad story of the years since her death, the team’s attrition as members fell out, went home to their planet, got taken in by Child Protective Services or, in the case of Molly Hayes, went off to live with a heretofore unknown Grandmother.  When they get to what happened to Victor Mancha, Gert finds that he is dead, having lost his life on a mission with The Avengers.  Chase digs up a box that purports to contain his effects, sent to them by Tony Stark, but when it is opened they find something more than just his letters or belongings.  (Hint: Something similar happened to Gwyneth Paltrow once.)

”CHASE IS THE APPENDIX.”

In terms of tone and dialogue, it’s a likeable issue, reminding us of the snark that Gert is known for, but a lot of the information we, the readers, already have, and much of what we DON’T know is intentionally vague, serving as future plot hooks, surely.  The result is an issue that feels very wordy without much resolution, as Chase and Nico are still scarred from their experiences in Murderworld, while Gert angrily takes them to task on everything.  (I will say that her admonition of “You guys have lost kids I haven’t even MET” is quite funny, though.)  The art is lovely throughout, including the final pages which show us where Molly is, but also make it clear that she’s being monitored by person or persons unknown.  It’s a very eerie sequence, making me wonder what exactly is up with her Grandmother.  As a single-issue reading experience, though, things do get slowed down considerably in this issue, which bothers me this early in the arc, seemingly another example of writing for a potential trade, but not making each chapter equally weighted.

Still, it’s not a bad issue, and Gert’s return works on an emotional level at least partly because of the amount of dialogue and character interaction here, leaving Runaways #2 with a better-than-average 3.5 out of 5 stars overall.  It’s good to see the band getting back together, and I like the fact that Xavin and Victor are mentioned in these pages as well, making it clear that it’s not just the core Pride kids who matter to the story being told.

Chase is still the appendix, though.  Totally…

Nice to have Gert back, but it moves a bit slowly...