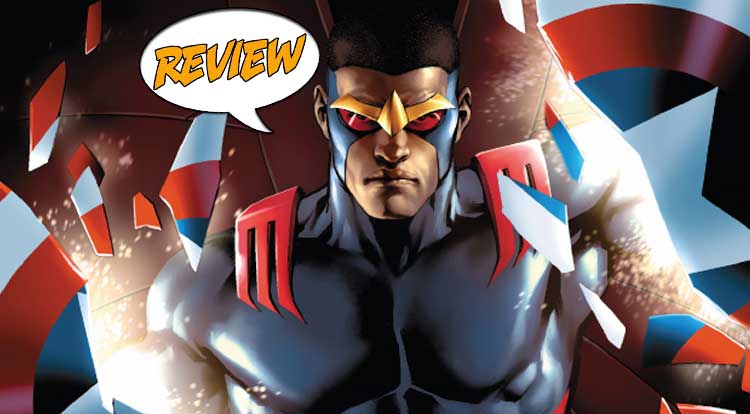 After his tenure as Captain America, Sam Wilson has to find his own legacy as a hero.  Is there still room for The Falcon in the greater scheme of the chaos of the Marvel Universe?  Your Major Spoilers review of The Falcon #1 awaits! Previously in The Falcon: “Sam Wilson was Captain America for a time, but in the aftermath of the Hydra takeover led by an evil version of Steve Rogers, he’s chosen to step away from the mantle and build a legacy of this own — as the high-flying Falcon!  Along with his new protegé, Rayshaun Lucas, AKA The Patriot, he’s embarking on a new mission to decide what kind of hero he wants to be.”

We open with Sam, in a well-designed new black-and-red suit, engaging in an ongoing gang dispute in Chicago.  After capturing a carload preparing for a drive-by shooting, The Falcon meets with the Mayor for a quick photo opportunity, indicating that he’s going to be sticking around to help with the larger problem.  The Mayor tries to dissuade him, to no avail, and Sam prepares to contact the leaders of the highest-profile gangs with an offer to parlay.  Before he can, though, The Patriot arrives to help, insisting that this training will be more important to him than the practice they had scheduled.  Falcon agrees, and the two heroes meet up with the gang leaders and convince them to meet on neutral ground.  It’s a successful moment, until The Falcon finds that he cannot move (as if my magic, you might say) and an all-out war erupts in front of him.  Dray, one of the gang leaders, slips away to meet with The Mayor, who turns out to be Mephisto’s wicked son, Blackheart, in disguise, who plans to use the divide to finally conquer humanity once and for all.

THERE IS A NEED FOR THE FALCON

There’s a lot to like about this issue.  Joshua Cassara’s art is quite good, especially on The Patriot, whose new costume I really like, and the flying sequences are amazing.  There’s a clarity to the storytelling that I truly enjoy, and Cassara’s facial expressions are solid.  That said, even with an enjoyable story, it feels very small in scale, making me worry that Sam Wilson is once again out of the top tier of Marvel heroes after Secret Empire.  There is a lot of narrative and in-universe damage to overcome, and this issue calls out the fact that The Falcon worked with Steve Rogers for many years, causing people to distrust him now, but it doesn’t feel like a real consequence, so much as an afterthought.  With Sam’s past as a social worker, I appreciate the use of uniting warring gangs here, though, and the dynamic between Falcon and Patriot is solid, as is Patriot’s cool new costume.  (Of course, he’s been around for like nine minutes, I’m not sure that a new costume was warranted, as even I can’t remember what the other one actually looked like…)

THE BOTTOM LINE: A GOOD START, BUT ROOM FOR GROWTH

In short, it’s a tense issue, with some well-crafted parts and strong art, but it leaves me worried that without the red, white and blue, Sam Wilson isn’t considered top-drawer hero material by the powers-that-be at Marvel.  The Falcon #1 is still an above average read and a book that I will come back for more of in coming months, earning 3 out of 5 stars overall.  If nothing else, I’m hoping that we can get some good, solid stories and character in for Sam, Rayshaun, Misty and the rest of the supporting cast, all of whom are vibrant and necessary for the Marvel Universe.

An interesting start, and while the story is enjoyable, I'm worried that The Falcon is getting demoted out of the top tier by Marvel editorial caveat...