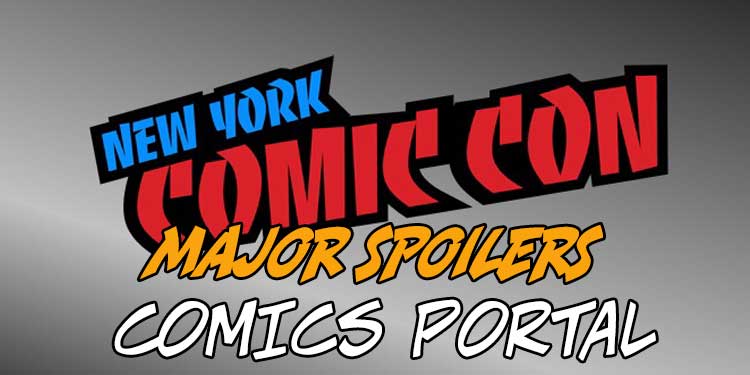 This year’s New York Comic Con, hands down, was the best one of theirs I’ve been to! And that’s saying something since I’ve attended a goodly number of them!

But I saw some unique advertising that surprised me. And it was found in the Men’s Room, of all places! In the debate regarding whether San Diego Comic-Con and New York Comic Con is better, I have to put my vote in for the latter. I was at both conventions this year, and I did love SDCC, but NYCC blew me away on several levels in 2017.

Yes, the crowds were large, making it tough to get around the building at times. Yes, Artist Alley was in a smaller location than last year, but it didn’t seem to slow down the interaction of creator and fan at all. Nice!

They surely could have benefitted from a larger venue to hold the event in, but there was so much content that included everything from comics to anime to many other genre-related items. It was a blast!

Of course, I have to give my dealer report! As always, I divided my time between setting up and conducting interviews for my podcast and helping out Richard Rivera at the Stabbity Bunny booth in the Small Press section. Well, Thursday, was absolutely terrific as far as income goes. The next-best day was Sunday, which really did well. Saturday was behind that, with Friday being the slowest day as far as sales went. Now, that did vary among dealers, but more dealers were closer to this pattern than those that varied — at least, in my experience!

And it was the con that we sold the biggest number of publications ever! On that point, I haven’t heard many other exhibitors give that report, but it meant a lot to us, anyway!

I once again have to thank the folks at BH Impact, who regularly work with DC to manage their press relations, because they were superb! I managed to get my interview requests in early enough to get on the schedule, but they were kind enough to help me fill in any gaps in their list and talk with several creators I was really anxious to talk with! Excellent!

I do want to get into one important issue, though, that seemed to make some of the difference this year — varying the policy on selling event passes. It was only a few months ago that NYCC caused quite a stir when it comes to selling tickets/passes to this event by limiting the number of four-day passes they offered. Instead, many of the passes were single-day ones, say on a Thursday or a Saturday, for instance. Some fans were heard to cry foul since it would reduce their opportunities to attend. Others were happy because they could actually go to NYCC for a change!

As I talked with several of the creators, I heard again and again that they were strongly in support of what NYCC did, and they hoped more cons would follow their lead!

Why? Well, the reasons I heard most often were that when more fans could access their booths at the con, it made more of their fans happy! Also, it made the cash register sing more often, which was also important to the folks on the other side of the booth.

Granted, some folks were unhappy that they could only go on a certain day or two. But given what I heard from many exhibitors and talent, I just bet you’ll see the same policy being employed in 2018.

ADVERTISING IN THE BATHROOM One of the few places at a con you can go for a momentary change of pace is the bathroom. You can rest your mind, and the rest of your body, for a brief moment. It helps you get through the crowded mornings and busy afternoons!
What I saw for the first time this year, and it was in the Men’s Room, were advertisements for a certain movie (I will NOT say which one) on the doors to the stalls and on the mirror above the sinks. (I didn’t check out the Ladies’ Room, by the way!)

Maybe I’m just not hip anymore (if I ever was), but my first reaction was that I felt like was back in Las Vegas. (Before I get into this, I want to express my condolences to those who experienced the terrible recent event there. I’m so sorry that happened, and I grieve for the folks who endured it as well as their families.)

When you fly into Las Vegas, the first thing you notice is a slot machine. I mean, you take one step into the entrance at the airport, and you immediately see them almost everywhere!

Now, I realize that a comic con is the perfect place to advertise TV and movies and such since the folks there are very likely to watch such things. But in the bathroom? On the stall doors so you have to look at it when you enter that space? And on the mirror so you had to look it when you were washing your hands?

What’s next, we’ll find ads on the toilet paper? On the paper towels we dry our hands with? I mean, come on! Do we need to be bombarded with advertisements even in the bathroom? Sheesh!

I came away thinking there was no way I was going to watch this movie… ever!

Is there such a thing as reverse advertising?

What do you think of advertising in this manner? Would you be open to it? Or not? And what’s your opinion of the NYCC change regarding passes/tickets? Do you agree with it, or prefer they’d go back to offering more four-day passes? Please be sure to share your thoughts below!