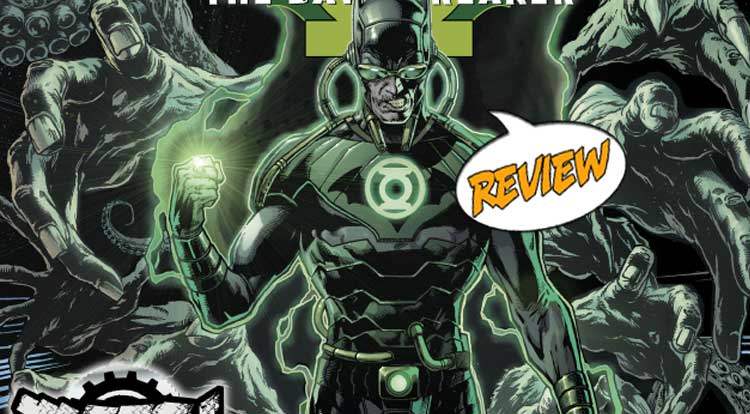 Somewhere in the multiverse, young Bruce Wayne didn’t train in the Himalayas to become a ninja/detective/superhero.  Instead, he was visited by an alien power object that made his every thought come to life.  Things went differently from there…  Your Major Spoilers review of Batman: The Dawnbringer #1 awaits! Previously in Batman: The Dawnbringer: As the events of DARK NIGHTS: METAL rock the DC Universe, the creatures of the Dark Multiverse stand ready to invade our world! How can even the World’s Greatest Heroes stop a horde of deadly beings that appear to be powerful, nightmare versions of familiar figures?

The origins of Batman are pretty horrifying stuff, when you think about it, and this issue really brings that home, showing us a young Bruce Wayne, moments after his parents were gunned down.  Before Earth-32 Joe Chill can train his gunsight on Bruce, a Green Lantern ring arrives, telling him that he has shown the power to overcome great fear.  “I didn’t overcome fear,” replies young Bruce, “it was obliterated from me.”  With his new power, he immediately orders the ring to annihilate his parents’ killer, only to be told that lethal force is not permitted in the Corps.  In a moment that borders on eye-rolling, Bruce overloads the ring with sheer force of will, causing it to murder Chill and leaving him as the most powerful man alive.  We see him go on a killing spree at that point, annihilating the villains of Gotham, murdering Commissioner Gordon when challenged, and wiping out a force of Green Lanterns and Guardians who came to strip him of his ring.  Declaring himself a new man in the light of the Bat-signal.  The Dawnbringer is then recruited by The Man Who Laughs (apparently another alternate Batman, this one patterned on The Joker) and sent to Coast City, where he clashes with Hal Jordan and nearly murders his fellow Lantern…

GLEEFUL DEPICTIONS OF MURDER THROUGHOUT

Okay, here’s the thing: As someone who routinely points out that Batman is not my favorite character, my opinions on Bat-books are considered suspect on matters Batly.  But this book is successful in creating a sense of despair and a real foreboding about a Batman who has the most powerful weapon in the world at his disposal.  I am not regularly reading the Metal titles, but I truly fear for the Justice League based on this issue’s depiction of the monstrous Dawnbringer, and his nearly fatal encounter with Hal made me sympathize with our GL, a tough proposition overall.  Van Sciver’s art is crisp, and as long as you’re cool with seeing a tween decapitating, disemboweling and murdering indiscriminately, there’s little to complain about.  As the issue ends, Dawnbringer has attacked Earth-0’s Coast City, a town that doesn’t deserve the amount of carnage it gets, leaving me worried about what happens next…

THE BOTTOM LINE: A REMINDER OF CLASSIC ELSEWORLDS

When it comes to your big crossover madness stories, the real question tends to be one of stakes, and this issue is completely successful on that level: Earth-32’s Caped Crusader is terrifying and effective.  I left this issue worried about the status of Coast City and a character that I actively loathe, which is impressive enough, but this issue also left me curious about Murder Machine and Red Death, leaving Batman: The Dawnbringer #1 with an unexpectedly good 3.5 out of 5 stars overall.  Given that I came into the issue skeptical about the concept, the character and the crossover, that’s a pretty amazing achievement…

Graphic, brutal and bloody, it sets up the threat of The Dawnbringer with horrifying precision...