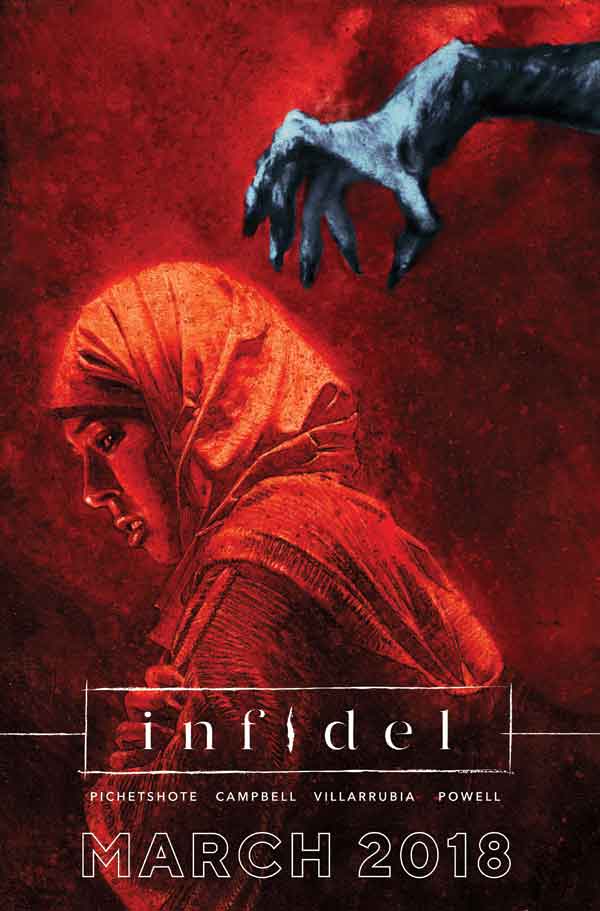 Writer Pornsak Pichetshote, and artist Aaron Campbell give horror a new name in the forthcoming Infidel, arriving in March 2018 from Image Comics.

Rife with political undertones, the new series will explore Islamophobia through a haunting and chilling story about one American Muslim woman and her multi-ethnic neighbors who move into a building haunted by creatures that feed on xenophobia. “I’m a huge fan of horror and was really interested in a horror story that more accurately reflected the multi-racial world we live in and the fears that seem to come with it,” said Pichetshote in a press release from Image Comics. “Aaron, Jose, Jeff, and I are really trying to take a classic horror staple—the haunted house—and update everything about it—setting it in the heart of the city, giving it a multi-racial cast where those backgrounds actually matter to the turns of our story, and centering our horror around the very distinct fears of today. I’ve taken to calling Infidel ‘political horror,’ and while we’ve been cooking this project for a while, the success of movies like Get Out make us optimistic that audiences will be as hungry to read something like this as we are to make it.”

This tautly-woven new series tackles controversial topics in race and racism and how it can affect people from different cultures. INFIDEL features a diverse, multi-ethnic cast where character backgrounds affect the plot twists and pacing as the story unfolds from issue to issue.