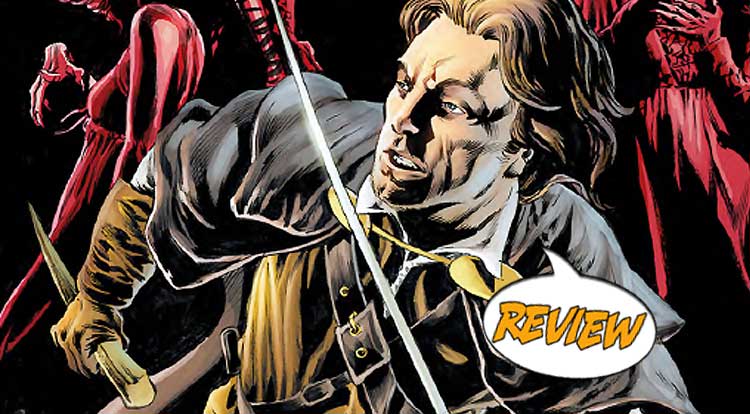 Even in the 17th Century, someone had to fight the undead.  Your Major Spoilers review of Hammer Comics: Captain Kronos #1 awaits! Previously in Hammer Comics: Captain Kronos: In the depths of Eastern Europe, the legendary vampire hunter, Captain Kronos, and his two assistants, Grost and Carla, are called upon to help rid a town of its vampire plague.

However, beneath the surface of the beleaguered town a malevolent force far more evil and deadly is awakening and it might just be the match of Kronos…

ACTION RIGHT OUT OF THE GATE

Fans of horror flicks fondly remember Hammer Films and their decades-long streak of gothic horror movies, including the 1974 outing on which this comic is based.  Though I’ve never seen this particular movie, that’s not at all an impediment, as this issue starts out with a bang, as a vampire confronts our good Captain, who has hunted him down in a misty forest of dark mystery, yadda yadda.  The undead calls his minions, but Captain Kronos has not come alone, as his companions Grost (an older man with much wisdom and more than a few gadgets up his sleeve) and Carla (who brings mostly courage and cleavage) join him in taking down the vampire horde.  They are discovered by a group of guardsmen who are more than pleased to find a vampire hunter in their neck of the woods, taking him to meet their patron.  There, Captain Kronos is told of a creature named Slake, a misshapen vampire of great power who has been tormenting the locals, and vows to bring him down.   Unfortunately for the Captain, the ghoul knows that Kronos is coming…

This issue’s art is by Tom Mandrake, perhaps best remembered for lengthy runs on ‘The Spectre’ and ‘Martian Manhunter’, and man has he still got it.  The storytelling in these pages is top-notch, from Carla’s sudden leap into battle to Kronos’ always determined expression, and the final page reveal of Slake and his secret undead army is perfectly chilling.  Abnett’s script is also well-done, with crisp dialogue (even with the impediments of Victorian phrasing and slang) and some impressive bits of tension-building.  A sequence where Captain Kronos takes out his dagger and carves a cross in a wooden gate is excellent, tense and well-done across the board.

THE BOTTOM LINE: AN ENJOYABLE READ

In short, this is an excellent comic book, perfectly suited for the lengthening dark nights of Autumn, with shadows and mystery from top to bottom, as well as some lovely fight sequences.  Hammer Comics: Captain Kronos #1 is pretty remarkable in how effortless the menacing tone seems to be, heightened by strong art from Mandrake and full of impressive moments (from what I can tell, it’s probably better than the source material), earning 4 out of 5 stars overall.