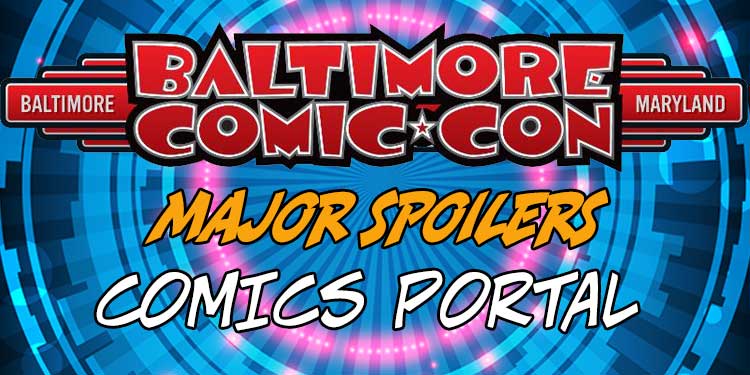 Anyone who runs an event knows that you have to expect the unexpected. You have to be ready for the worst to happen, and hope for the best!

This past weekend, I attended one of my favorite cons, the 2017 edition of the Baltimore Comic-Con! Something happened that distracted from the event… for the second year in a row!

FIRST, HOW WAS BALTIMORE COMIC-CON?

I’ve been coming to this convention for several years now, and I really appreciate the press pass I received this year! Thanks, folks!

As always, it’s important to point out that the Baltimore Comic-Con really strives to focus on comics, which I think is terrific. Yes, they’ll have media stars, but they will be from shows that are comics-related rather than people who just draw a certain number of people. This year, that included two of the stars from Fox’s Gotham, David (pronounced Dah-VEED) Mazouz and Sean Pertwee, as well as Lynda Carter (Wonder Woman) and Finn Jones from the Netflix Iron Fist series, among others.

But the real stars of the show were the comics creators, the comics companies, the exhibitors and, of course, the folks in Artist Alley.

There was a wide variety of folks there from the comics industry, from Neal Adams to Tom King to James Tynion IV to James Haick from Solar Flare and other Indie creators. The companies represented included IDW Publishing, Ominous Press, Scout Comics, and many other great organizations dedicated to bringing the best in comics storytelling to your eyeballs and mental processes!

As usual, I was helping Richard Rivera promote his Stabbity Bunny series, which recently was picked up by the aforementioned Scout Comics. Each convention brings new fans and old together, and this was true of many comics and other kinds of wares for sale! On Saturday, the con celebrated Batman/Harley Quinn Day with several events and happenings, too!

This was also the first year for the Ringo Awards, named after long-missed comics creator Mike Wieringo! That was a great way to remember him, I thought, and expect this to happen each year from now on!

I don’t know for sure, but it sure seemed as if there were more people attending this year compared to 2016. The aisles seemed more crowded, and the dealers seemed busier!

I’m always impressed by the cosplayers, and there were many great costumes that treated our eyes! No Hawkgirl that I could see, but lots of Jokers, Harley Quinns, Iron Fists (naturally), and other heroes and baddies about!

It had a festival feel to it, with a lot of families laughing and enjoying themselves as they checked out the works of artists both local and from far away as well as looking for comics, toys and other goodies.

As always, it was fun! Last year, just about the time the convention was closing on Saturday night, the fire alarm went off. Even though everyone wanted to continue their con experience, we all headed outside the building as things were checked out from stem to stern.

Richard and I headed back to our hotel room even though there was still some time left before the con was to close that day. After all, it was getting close enough that we figured they’d stop things for the day.

That didn’t turn out to be the case, we learned later. My twin brother was somewhere else in the convention center, and they announced it was all clear, so he went back to our booth. When he saw we weren’t there, he sat at the booth until closing time, then looked for us back in the room to tell us what happened.

Nobody wanted to buy anything, so we thanked him for looking over the stuff, but didn’t feel much had been lost.

Switch forward to this year’s event. Saturday’s program came and went without a hitch, so we felt the curse had been broken.

That was, until Sunday morning.

We had gotten there early, set up the booth, and were waiting for the VIPs to come in around 9:30 when, after a few minutes, that same fire alarm went off!

Many of us grumbled and fussed as we again evacuated the building. We even noticed and smelled smoke in the loading dock area. Many of the dealers were outside that area for over a half hour when the word came that we could once again enter the building.

I’m not sure what had happened, but there was still some smoke to be seen as we entered the event floor. Inside was perfect, but what had taken place to make the alarm sound none of us could tell.

I mean, I’m sure the folks behind the con were flabbergasted that this happened again, two years in a row! I’m sure next year, they might even station volunteers all over the building to, if possible, prevent this from once again taking place.

But you can’t possibly stop every possible diversion from happening!

WHAT WAS THE RESULT? In 2016, everyone who had been in the con on Saturday was given a free pass to the following day. There was great rejoicing at that, you can be sure!

This year, the time on the floor wasn’t extended or any kind of change offered — except an apology over the loudspeaker system.

Honestly, a lot of the dealers and some of the fans in attendance felt that some of the energy that had so many optimistic that day had left the building. Now, don’t get me wrong: We did have a pretty good day. But the fact that this happened two years in a row, well, that was deflating.

I think this year the con organizers did the right thing, though. You can’t keep giving out freebies to people because something you have no control over happened. You’d go out of business if you did that too often!

DID THAT RUIN THE CON?

When I talked with many of my friends and fellow folks behind the tables, most felt that, while it was a sad thing to have happen again, in the end it didn’t dampen the experience of Baltimore Comic-Con 2017.

Many of us were already making plans to be back in 2018. And fan and dealer alike, we did have a better experience (both monetarily and inspirationally than in 2016.  Personally, I’m looking forward to attending Baltimore Comic-Con again next year! It was fun again this year, and so much worth the attending!

If someone pulled the fire alarm again or tried to damage Baltimore Comic-Con, I don’t think that person was successful. Just don’t try it again next year, okay?

To find out more about the Baltimore Comic-Con, you can go to their website at this link! They most certainly will be back next year, so check out their site in the days and months ahead!