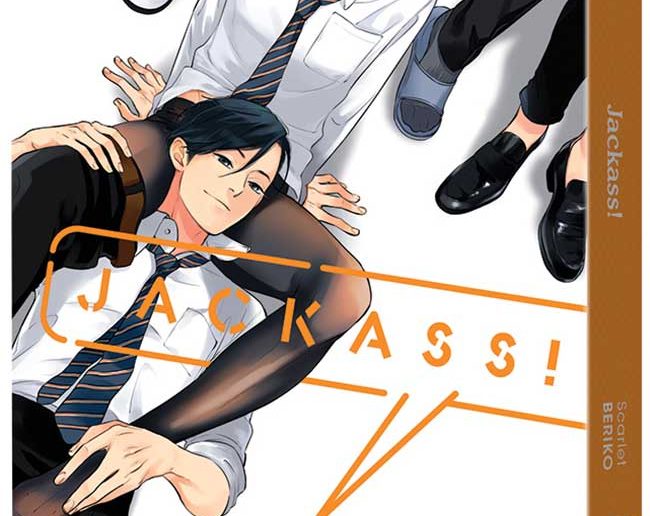 [Manga] SuBLime to release English adaptation of Jackass in October

JACKASS! is rated ‘M’ for Mature Readers and will be available as a single-volume release in both print and digital formats. Print editions will carry an MSRP of $12.99 U.S. / $17.99 CAN each. The digital versions will carry an MSRP of $6.99 U.S. Readers have two methods of digital access to the volume on SuBLimeManga.com – via a DRM-free downloadable PDF, viewable on any enabled eReader device and computer, as well as via the online manga viewer. Readers can also purchase a digital version through the NOOK, Kindle and Kobo eReaders as well as on Google Play.

In JACKASS!, practical Keisuke’s incredibly handsome best friend Masayuki has always rubbed him just a little bit the wrong way. Maybe it’s because Masayuki is rich, carefree, and so stunningly handsome that he can, and does, have any girl he wants. But one day, when Keisuke accidentally wears his older sister’s panty hose to gym class, it’s suddenly his hot friend who’s doing the rubbing…on Keisuke’s panty hose-clad legs! Has he unwittingly unleashed a secret fetish that will change their relationship forever?

“Fans are going to enjoy this steamy love story that explores an unexpected sexual attraction between best friends and the sticky situations they find themselves in,” says SuBLime Editor, Jennifer LeBlanc. “Find out how a pair of panty hose can change the lives of best friends in this exciting fall release!”

Yaoi manga creator Scarlet Beriko began her career in 2010, and she has since gone on to create several manga in the BL genre, including Minori no Te, Yondaime Ooyamato Tatsuyuki, and Jealousy. She has also published several tutorials on drawing manga.