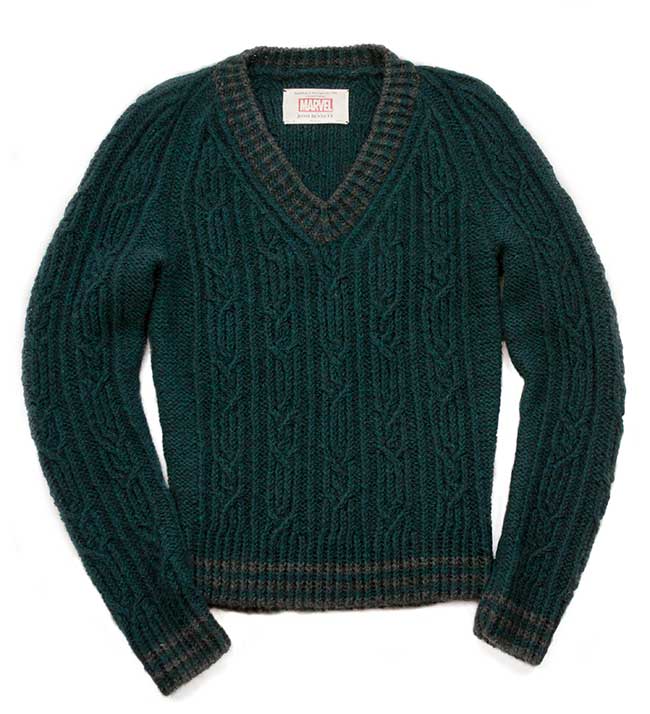 Josh Bennett, fashion designer and knitter extraordinaire, brings his passion for Marvel and its complex storytelling into a new sweater collection inspired by Marvel Studios’ Thor: Ragnarok. The new line will showcase Nordic influences, luxury fibers, and fantastical touches across a tight range of men’s sweaters available this holiday season.

Hand knitting has had a renaissance recently, taking the fashion world by storm, and Bennett has led that charge with custom knitwear collections in conjunction with Bergdorf Goodman, Michael Bastian, Tommy Hilfiger, and others. Sweaters remain a staple of winter fashion, and hand-crafted knitting is the ultimate in luxury with each piece designed and finished in the US by Bennett himself. Josh has also expanded his business by using KOCO (Knit One Care One), a knitting hub located in India, that empowers and educates women in the skills of knitting, math, and English.

Bennett has always had a love for storytelling, and grew an appreciation for the robust worlds in Marvel stories as he immersed himself in Marvel films. When Thor: Ragnarok was announced as a November release, the unique settings, bold colors, and sense of wonder made it a perfect idea for a winter sweater collection. Using references from the film, modern day trend influences, and new knitting techniques, Bennett has created a first-of-its-kind collection.

“Thor has been a character in Nordic mythology long before Marvel captured the Asgardian prince in his debut comic in 1950. The film reference was a fantastic help to tell the story and set the mood, but I knew I did not want these sweaters to be literal depictions of the characters. I decided to combine aspects of the original Norse stories with the rich Marvel storytelling, making each sweater desirable to super fans of both genres. Each design has unique details that reference both authentic Norse mythology and Marvel plot points,” states Bennett.

Marvel has had great success with merging its characters with the fashion world, as its fandom is excited by lifestyle apparel to have a unique way to celebrate their passion for the brand and characters. Past collaborations have spanned couture to performance wear, but this is the first co-branded sweater line ever done from Marvel. The luxury limited edition collection includes four different styles, a chunky cardigan, v-neck tennis sweater, fisherman hoodie, and fair isle zip up, and uses yarns including 100% Italian cashmere and yarns from New Zealand, a nod to Thor: Ragnarok director Taika Waititi. Each sweater is extremely limited to no more than three pieces per size for each style and is numbered and dated.

“Marvel characters are cool, strong, and relatable, so it is exciting to see such a smart and creative interpretation of the main players in Thor: Ragnarok,” said Paul Gitter, senior vice president, licensing, Marvel at Disney Consumer Products and Interactive Media. “We constantly strive to extend the scope of what Marvel merchandise can be in order to expand what current fans are looking for and to bring in new fans, so a luxury sweater collection is an amazing way to celebrate this unique film and how far the Marvel brand has come.”

The Josh Bennett x Marvel collection ranges from $1095 – $1495 USD and is available to shop online at www.joshbennettnyc.com beginning November 10th with a pre sale October 10th.

About Josh Bennett
Josh Bennett grew up in Pennsylvania where he learned to knit from his grandmother when he was 8 years old. After a short time, he stopped, because boys don’t knit. Then he got interested in musical theater, because all boys sing and dance. In 2000, Josh worked at the Goodspeed Opera House in East Haddam, CT where he picked up knitting again from the cast members in the show, and hasn’t stopped since.

After moving to New York City in 2001 and knitting constantly, Josh worked at a yarn shop on the Upper West Side that wrote custom patterns for their customers. Noticing the lack of menswear patterns being designed and published, he took his pattern writing skills and was determined to change that.

Since, Josh has collaborated with CFDA Award winner Michael Bastian on a hand knitted line, Michael Bastian by Josh Bennett sold at Bergdorf Goodman, Sak’s 5th Avenue and stores worldwide. They have also worked together on projects for the Folk Couture: Fashion and Folk Art at the American Folk Art Museum, Le Cabinet de Curiosités of Thomas Erber, and a fashion helmet for the NFL/Bloomindale/CFDA Super Bowl XLVIII collaboration which was auctioned off for the NFL Foundation.

He was the Men’s Sweater Designer at Tommy Hilfiger and has also worked with and designed for GANT by Michael Bastian, Perry Ellis, Alexander Wang, Rowan Magazine, Vogue Knitting, and other knitting publications. He is the designer of his own exclusive capsule collection of men’s hand knitted sweaters at Bergdorf Goodman, Josh Bennett + Goodman’s.

About Marvel Entertainment
Marvel Entertainment, LLC, a wholly-owned subsidiary of The Walt Disney Company, is one of the world’s most prominent character-based entertainment companies, built on a proven library of more than 8,000 characters featured in a variety of media over seventy-five years. Marvel utilizes its character franchises in entertainment, licensing and publishing.
For more information visit marvel.com.
© 2017 MARVEL