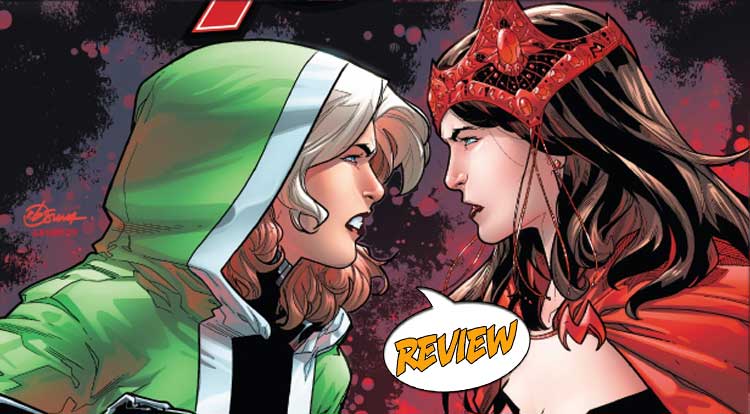 Previously in Uncanny Avengers: “The world is still recovering from the Hydra takeover orchestrated by an evil version of Steve Rogers — and so is the Unity Squad.   When most of the team was trapped inside the Darkforce Dimension, only Quicksilver was able to respond to the initial battle against Hydra in Washington, D.C. — arriving just in time to see a powerful demon take hold of his sister, The Scarlet Witch.  The possessed Wanda fought ruthlessly for Captain America’s cause during Hydra’s reign, but no that the empire has fallen, life has begun to return to normal.  Can the same be said for the Maximoffs?”

After spending weeks trapped in the Darkforce dimension, fighting off monsters and saving lives, the former Avengers Unity Squad (The Wasp, The Human Torch, Rogue, Doctor Voodoo, Synapse and Quicksilver) have returned home, in a very literal sense.  With the hotel formerly known as Avengers Mansion devastated by the Hydra invasion, the owners have offered to let our heroes crash there until they figure out their situation, given that most of them have no homes other than as part of this team (which Captain America disbanded and left hanging, we might add.)  There’s some lovely character interactions here, as a conversation between Rogue and The Torch is both sweet and loaded with subtext, while a strong undercurrent of ‘ship tease takes place between Doctor Voodoo and The Scarlet Witch, only to be interrupted by an attack by a maddened Graviton.  As if aware of the greater Marvel Universe and those creating it, Graviton has decided that nothing matters, that all is chaos and that somebody will be along soon enough to blow everything up, so he is gonna take out these Uncanny Avengers in the name of…  whatever.  Also: He shoots Wanda into airless space.

The highlight of this issue is Jericho Drumm, Doctor Voodoo, who calmly talks down his teammates when Rogue and Wanda start snarling at one another, then has a meaningful conversation with Wanda about the nature of possession and his powers.  It’s clear that, if this team has a leader, it’s him, and I”m hoping that they follow up on it sooner rather than later.  The Human Torch also gets to be charming, in his hot-headed, snarky way, and I’d like to see more of his relationship with Rogue (especially given his personality resemblance to her One True Partner, Cajun Dirtbag Gambit.)  The art is phenomenal this time around, making even Synapse’s somewhat weird uniform look incredible, making the Scarlet Witch’s traditional headdress a spangly, beautiful bejeweled crown-thingy, and delivering on the idea that Graviton turned off the gravity and is gonna start busting up the place like robot Richard Nixon…

In short, this is a perfect breather from the endless skull-crushing, heartrending nonsense of ‘Secret Empire’, with the sense to immediately launch this team/family into the next phase of madness in true old-school Avengers fashion.  Uncanny Avengers #26 is a good’n, featuring excellent, clean art with tons of detail and nuance, combined with a script that helps to illuminate the members of this team, giving us all reasons for how and why they’ve chosen to stay together, earning 4 out of 5 stars overall.  I’m actually hoping that Deadpool and Captain America stay away for a while, so that we can see this team of lesser-spotlighted heroes do their own thing under Zub and Izaakse’s hands…

Really tight, emotional scripting and excellent art make for a nice "put the pieces back together" sort of issue. Also: Graviton's meta-textuality makes me smile a bit.