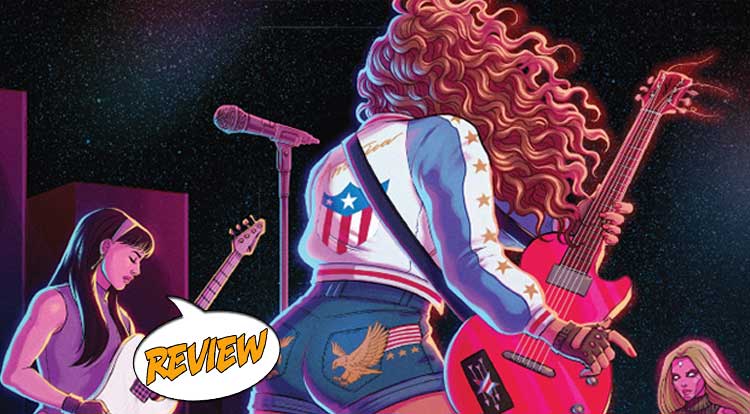 Bad things are happening for America Chavez, and all signs point to The Midas Corporation.  Your Major Spoilers review of America #6 awaits! Previously in America: Having set off for college with her friend Prodigy, America’s first lesson was in how to time-travel.  Teaming up with her past self, she defeated a monster, only to meet an elderly lady who claimed to be related to her.  (#TimeTravelShenanigans)  On Spring Break, she hung out with Kate “Hawkeye” Bishop, hooked up with an ex that she still held a torch for, and got stabbed in the back…

A FIGHT TO THE DEATH

After being drugged by her ex-girlfriend, America awakens in the middle of a boxing ring, surrounded by Mindless Ones (!!) as Arcade makes the announcement that she is going to fight Magdalena (the aforementioned ex) to the death.  Thankfully, it’s an Arcade plan, so we know it’s not going to go according to the expectations.  While Magdalena and America figure things out in the ring, Hawkeye and the mysterious Madrimar bump into each other, with Madrimar using her star-portal powers to track down America.  As the archer and the luchador break in to release Magdalena’s hostage father, America convinces Magdalena that fighting to the death is not the answer, only to have the cavalry arrive.  There’s some power-training, a big reveal and truly wonderful bonding moments for all of our cast, ending with an ominous words from Arcade’s villainous sponsor…

“IF YOU WEREN’T MY GRAND-DAUGHTER, I MIGHT HAVE A HARD TIME LIKING YOU…”

With all the time-travel in play, I honestly expect the reveal to be that Madrimar is America herself as an adult, but the reveal that Mac actually has genetic family is much better, especially when it becomes key to defeating the Mindless Ones.  This book is wonderful from top to bottom for me, giving us action, some romance, the sweet friendship bond between Kate and our hero, plus I absolutely adore the idea of an elderly costumed woman super who could serve as America’s mentor.  The link to her lost family is exactly what she needs, and Villalobos’ art is perfectly suited to the story being told.  I especially like his take on the lumpy messes that are The Mindless Ones, with moments that feel very much like the work of Richard Corben during the battle sequences.

America #6 deserves the highest recommendations, taking its charismatic lead and putting her in different, emotional situations throughout the book, highlighting her loves, her friendships and her family as much as her power and determination, leaving me giddy about my new fave-rave character and earning 5 out of 5 stars overall.  If you’re not reading this comic, you’re missing one heck of a ride.