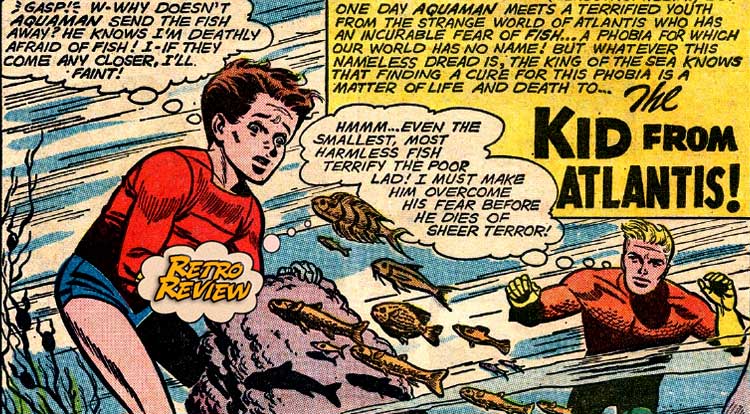 Recently, I asked my 13-year-old what DC Comics character she wanted to know more about, and her response was “Aquaman is bad, but Aqualad is really a chump!”  Such an insult cannot be allowed to stand, and now it’s time to drop some learnin’…  Your Major Spoilers (Retro) Review of Adventure Comics #269 awaits! Previously in Adventure Comics: One of the earliest heroes in comics, dating back to 1941, Aquaman spent many years on the sidelines of the major moments in the nascent DC Universe.  He never joined the Justice Society Of America, and indeed, during the 1980s, there was some debate over whether an Earth-2 version of the character even existed, since his stories were so separated from Superman, Batman, et al.  By the ’60s, though, he was near the top of the DC heap, a founding member of the Justice League, a television star and a highly recognizable superhero.  All he was missing was one important piece of 60’s heroic ephemera: A sidekick!

But first, let’s check in with the star of this issue! Yes, Faithful Spoilerites, Adventure #269’s headliner, by sheer force of S-on-his-cape, is Krypto The Superdog!  The Adventure lead feature is ostensibly Superboy, but the sheer scope of the Super-universe led the editorial team to experiment with different types of stories.  (One notable experiment a few months before this issue would eventually lead to the Legion Of Super-Heroes stealing Superboy’s lead spot in the book by 1962 or so.)  Krypto’s story began with Superboy chiding him for interrupting an important missile test, banishing him to the moon, only to have the rebellious pup fly off to a far-away galaxy, where he meets his new best pal, Solar Boy!  Thinking he’s found a new, nicer master than the martinet he left on Earth, Krypto decides to stya.

It is a mistake.

Solar boy isn’t nice at all, but a cruel jerk who previously tangled with Superboy and holds a grudge against the boy and dog of steel.  Stealing Krypto’s powers, Solar boy sets out torturing Krypto with cruel prank after cruel prank, even leaving him to be eaten by monsters before swooping in to save the terrorized mutt.  Fortunately Krypto is able to sabotage a robot’s control cabinet with his tail, causing Solar Boy’s power-sapping machinery to fail…

After destroying Solar Boy’s super-powers and throwing him into a swamp with a cavalier “Here’s mud in your eye!”Krypto races hom to make up with his Kryptonian pal.  It’s actually a pretty cute story, and an important reminder that having an S-shield was a sales bonanza for years, even if that shield was on a dog, monkey or chicken.  The second feature this issue is mighty metatextual, as Green Arrow is called in to disprove the physics of a comic book story featuring an archery hero… G.A. and Speedy are put to the test, but manage to pull off each arrow-related super-stunt, with a final page wink to the writer, asking him not to make up harder stunts, as they might not always be up to the task.  Finally, we get to the part of the issue that brought us here, the first appearance of Aqualad.  It starts with a routine ocean patrol by the King Of The Sea…

Finding a mysterious young man in a capsule, Aquaman first worries that he’s gotten stuck in a Superboy story by mistake., but after a quick check with editorial (No, that didn’t really happen), he discovers that the strange young man is in exactly the wrong place… To be afraid of fish in the Atlantic Ocean, with a superhero who controls fish, is a sad tale, indeed.  But it’s even sadder when we find out why the poor lad (who is already wearing a symbol like Aquaman’s on his belt, oddly) was ejected into the pod in the first place…

Clearly, the “A” on their belts stands for Atlantis!  Aquaman, himself a reject of the underwater city (depending on the telling) knows that the boy’s purple eyes would mark him for rejection by the city.  In this story, it’s because he is a genetic throwback who won’t survive in the ocean; later tales would give a more sinister aspect to things.  Either way, it soon becomes clear that the boy would not be happy underwater, surrounded by fish, as he’s terrified of even the tiniest guppy.  Aquaman tries to help him with a little (you should excuse the expression) immersion therapy…

Slowly, the Aqualad comes around to seeing the good side of fish, finding them to be helpful, brave and high in Omega-3 fatty acids for digestive help, but still finds himself leery of their weird, limbless torpedo bodies.  It takes a moment of real danger for the boy to overcome his fear of underwater creatures and channel his own heroic nature… This story throws out a lot of “Oh, by the way” about Aquaman’s history, powers and Atlantis itself, dropping the knowledge that all Atlanteans have telepathic powers, allowing Aqualad to save the day.  Having helped the boy conquer his fear of fish, Aquaman sends him back to Atlantis, but finds himself saddened at losing his new pal.  The next day, Aquaman finds himself absent-mindedly playing the same games that he used to teach Aqualad not to fear fish, when the boy suddenly swims up with a big smile on his face…

And thus is born a friendship that would launch a cartoon show and eventually crumble under the weight of jealousy over a woman.  (The 1990s were not a good time for sidekicks, Faithful Spoilerites.)  I have to say, this is a charming little story, made more so by the lovely art of Ramona Fradon, leaving Adventure Comics #269 with an unexpectedly delighted 3.5 out of 5 stars overall.  Aquaman may get no respect, and Aqualad even less, but you can’t help but find the beginning of their partnership to be kind of adorable, making you wish that DC had even the slightest idea what to do with any of their sidekick/partner characters.

Y’know, other than murder, dismember or abuse them, I mean.

A trio of cute stories, all of which are surprisingly effective, with lovely art, especially by Ramona Fradon. Nice work!