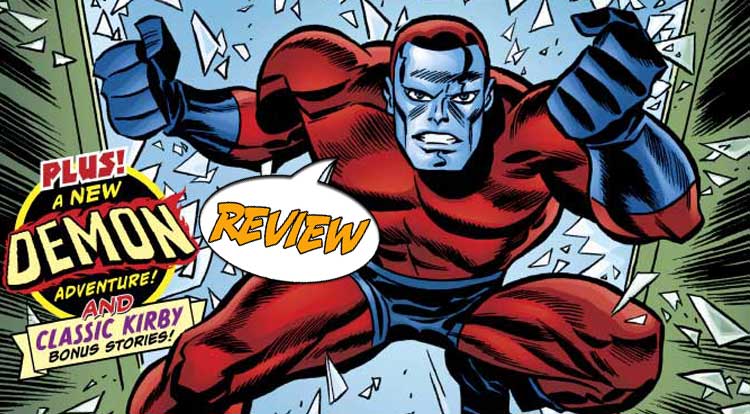 Did I mention that Jack Kirby’s 100th birthday is upon us?  What better way to celebrate than with several of his most interesting DC creations!  Major Spoilers review of Manhunter Special #1 awaits! Previously in Manhunter Special: “Big-game hunter and private detective Paul Kirk has marshaled his skills to fight crime as the masked vigilante known as Manhunter. But now crime has reached epidemic proportions that may push him to the limits – and draw the attention of the Golden Age heroes Sandman and Sandy!”

The lead story in this issue features Paul Kirk, Manhunter, in his classic blue steel mask chasing down leads on a particularly heinous murderer.  His brutal methods attract the attention of Wesley Dodd, The Sandman, who intercepts him on his path of vengeance.  The two heroes clash, arguing mightily, in a wide-ranging battle sequence that is itself very Kirby-esque, ending on a somewhat strange note for me.  In our second feature, Jason Blood laments to a strange old man who turns out to have secrets of his own, leading to another really well drawn conflict and ending with Blood wondering if he and Etrigan can’t coexist after all, with some work.  The remainder of the issue presents a frightening Tale Of The Unexpected with a killer hook, drawn by Kirby himself, and two fascinating features from ‘Real Fact’ Comics that posit what a world of tomorrow might look like circa 1946.  Both are full of Kirby’s futuristic machinery and tableaux, and are themselves as entertaining as the tributes at the beginning.

The lead feature is a strange one for me, as Giffen and Buckingham really deliver on the premise of a Kirby-style battle sequence featuring his signature poses and line work style, but the story is brought down by Dan Didio’s dialogue, a running argument on whether Sandman’s merciful approach is better than the brutal one applied by Manhunter.  Some of the dialogue seems like it is taken from or homaging existing Kirby works, but it just doesn’t ring right to me.  The Demon story is much better, full of philosophy and musings on good versus evil (plus they got Steve Rude, who is able to emulate Kirby while delivering his own modern art stylings), and the reprinted material that closes the book is also lovely to see fully restored.  (Real Science Comics is one of the neglected, fun bits of DC Comics history for me.)  I’d also have liked to see a different balance in the presentation, rather than giving us all the tributes up front and finishing with the actual Jack Kirby material in the back of the book, but that’s more a personal preference.

THE BOTTOM LINE: A NICE TRIBUTE

Most pleasant of all is the fact that this issue provides a double-sized package for only a dollar more than many regular-size modern comics, making it a relatively affordable package full of long-unseen comic book gems.  Manhunter Special #1 needed better dialogue in the first story, and could have presented the material in a better order for my tastes, but features some lovely artistic tributes and really excellent reprints, earning a better than average 3 out of 5 stars overall.  Now, if somebody could only get Destroyer Duck back in print for me, I’d be set…

DiDio's dialogue is grating, but the art and energy (especially in the Kirby reprints) makes this worth the price of admission...