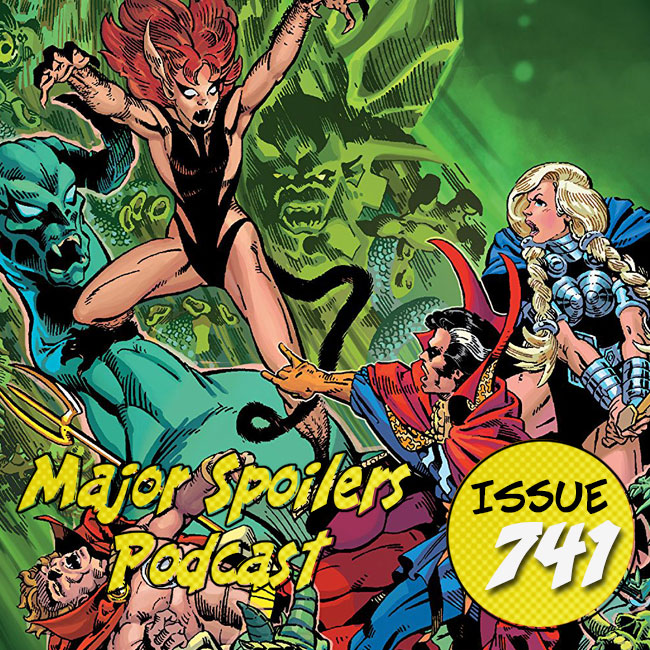 This week on the Major Spoilers Podcast: The Six Fingered Hand bring the demons to comics and the Defenders are there to push back on evil. Plus Time and Vine #2, Chilling Adventures of Sabrina #8, and DuckTales – Woo-oo!

REVIEWS
STEPHEN
TIME AND VINE #2
Writer/Artist: Thom Zahler
Publisher: IDW Publishing
Cover Price: $4.99
Jack starts teaching Megan the rules of time travel, while Darren teaches her all about the winery. And Megan takes her first solo trip back in time to the ‘80s, where she discovers a startling family secret!

“WITCH-WAR” Part Two, “Burnt Offerings”: Edward Spellman, trapped in Harvey’s body, has been reunited with Sabrina, and is ready to enact his dark agenda!

DISCUSSION
DEFENDERS EPIC COLLECTION: THE SIX FINGRED HAND SAGA
The greatest non-team in comics gets the Epic treatment! J.M. DeMatteis and Don Perlin take Doctor Strange, the Hulk, Nighthawk, Hellcat and the Son of Satan on wild adventures into the occult - and against each other. These weird tales begin with a broken Eternity, evolve to include demons, Dracula and the Devil-Slayer, and culminate in a double-sized issue #100 extravaganza. If the Defenders can't prevail it'll be Hell on Earth -literally! Collectively known as "The Six-Fingered Hand Saga," it's one of the most compelling Defenders adventures of all time. COLLECTING: VOL. 6; DEFENDERS (1972) #92-109; MARVEL TEAM-UP (1972) #101; CAPTAIN AMERICA (1968) #268