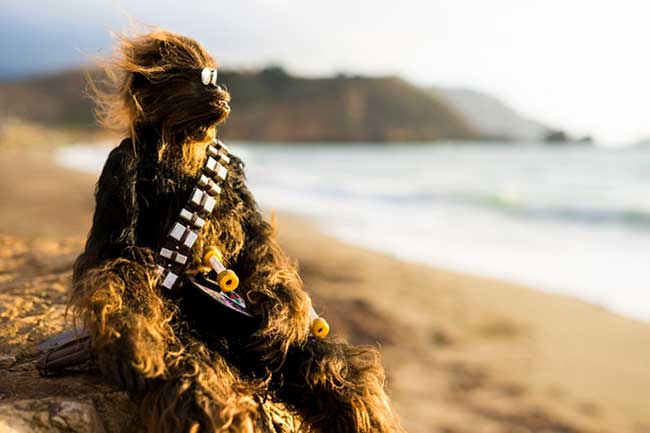 Dynamite Entertainment is pleased to announce that they have partnered with social media sensation and pop culture photographer, Johnny Wu (aka @Sgtbananas) for the launch of their latest Kickstarter crowdfunding campaign, which will celebrate his work with a gorgeous Kickstarter exclusive hard cover art book, Ten Frames Per Second; An Articulated Adventure! With an expected shipping date of December, this first-ever collection of Johnny’s work will take you on a journey through your childhood in this visually stunning and nostalgic adventure.

The Ten Frames Per Second; An Articulated Adventure Kickstarter campaign is live now, and can be found by visiting:
https://www.kickstarter.com/projects/dynamiteent/johnny-wu-10-frames-per-second-an-articulated-adve
Johnny Wu (aka @sgtbananas) has turned a passion for toys and photography into an immersive and fantastical adventure that changes dreary reality into a world where all of your childhood fantasies can come true.  Through these images we can visit a world where Teenage Mutant Ninja Turtles can fight Storm Troopers, and Transformers can walk alongside Spider-Man.  The only limit to what we can encounter is our own imagination.  Johnny’s photography provides a window to the wonder we experienced as children when the toys which occupied our worlds weren’t just plastic collectibles, but vehicles to unleash the unending imagination of youth.  Armed with his favorite toys, a passion for photography, and a highspeed camera, Johnny has turned his interest in making life-like scenes with action figures into a brand on Instagram.  Anyone following his @sgtbananas feed will find the most amazing images turning the mundane into something truly remarkable.  It is the combination of his sense of photography and a vibrant imagination that come together to make his visions a reality.
“I’ve been a toy collector my whole life,” says Johnny Wu. “I’ve always had a strong connection to toys, but it wasn’t until I started taking photos of them that I felt that I was able to share how special they are. Ten Frames Per Second is my lifelong love of toys and photography coming to life. I never stopped being a kid, and I hope that my photos reach the inner kid in all of us.”
“Anyone working in the comic book industry must truly be a kid at heart,” says Nick Barrucci, CEO and Publisher of Dynamite.  “Johnny Wu’s work captures that very spirit in each and every image he snaps, making Ten Frames Per Second; An Articulated Adventure the perfect project for us to partner on. We’re thrilled to work with such a unique and modern talent to bring this epic journey into the homes of children – young and old – everywhere.”
The Ten Frames Per Second; An Articulated Adventure exclusive hard cover art book edition features some of Johnny’s amazing toy photography across 224 amazing pages and gives us a peek directly into our collective childhood with Johnny’s incredible vision for his toys.  Using full size common place locations and props, Johnny has blended the real and surreal into a vibrant representation of imagination as his photography takes you out of the humdrum of your daily life and reminds you what it is like to see things through the eyes of a child. The Ten Frames Per Second; An Articulated Adventure Art Book is a fantastic journey into the imagination that we know will resonate with you, as this first collection of Johnny’s work and will take you on a visual tour of pop culture toys with tableaus that are refreshing, inspiring, and energetic.  This book is a source of joy that can be pulled off your bookshelf and shared with anyone to spark conversation and nostalgia.
Ten Frames Per Second; An Articulated Adventure is currently being worked on by Johnny Wu.  He has sifted through thousands of photographs to find his favorites that represent a wide range of classic toys.  Backers who support the Ten Frames Per Second; An Articulated Adventure Kickstarter have the opportunity to receive rewards, including digital editions, hard cover art books, variant covers, full print collections, artist signed editions, and the opportunity to have your favorite toy photographed in an exclusive Johnny Wu photo shoot! With tiers designed to fit any collector’s budget, backers will have the potential to enjoy a number of great rewards, including:
The Ten Frames Per Second; An Articulated Adventure Kickstarter is available for a limited time only. Backers can get on board and gain access to all of these amazing rewards by visiting https://www.kickstarter.com/projects/dynamiteent/johnny-wu-10-frames-per-second-an-articulated-adve today!