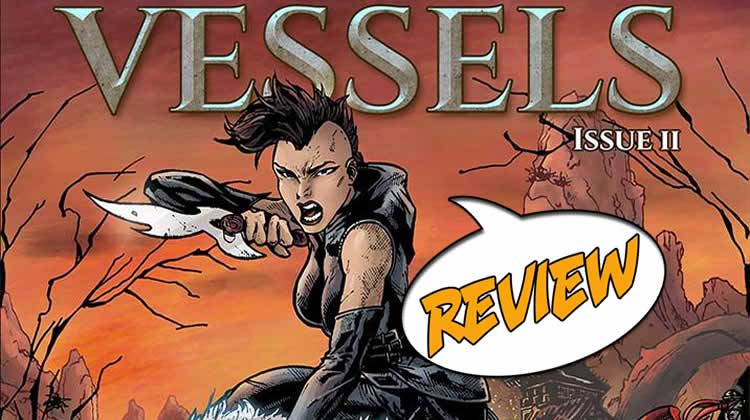 I’ve often wondered just how “real” dreams are. I mean, I sometimes wake up and wonder if they really happen to me, perhaps in another reality. One time I dreamed I had found this comic I really, really wanted. When I woke up, I started to look for it, only to be disappointed because “it was only a dream.”

This series continues to explore what happens when the line between dreams and reality deteriorates.

Previously in VESSELS: The dying world of Cairnthala has a new champion. Wake, the Transcended warrior of light, has emerged, and hew quest to slay the demonic Eye-God has only just begun. As the fabric of reality continues to fray, more strange occurrences take place, while objects from other dimensions rain down from the sky, bringing chaos to Wake’s world. But now Wake has a plan. Her goal is simple: seek Memorata, slay the Vessels, take the power of their souls and defeat the Eye-God before Cairnthala itself is warped beyond repair.

I reviewed the first book in this series at this link. I enjoyed it tremendously, and this issue continues moving that story forward just as effectively.

I don’t think this comic could have been made at a better time. Game of Thrones on HBO is very popular, and I see several similarities to that hit series. Multiple kingdoms, various levels of society bucking against each other, and strong female characters who pretty much dominate the landscape

As I mentioned previously, Wake is a very strong female lead, something I always adore in a comic. We discover more about her this time, including her confidence in herself and what she can accomplish. It’s interesting that when religious leader Orall looks at her beyond the veil, he sees a powerful warrior goddess. Sadly, he chooses to remain unconvinced. The queen refers to Wake as “legend come to life.” And yet, Wake doesn’t take herself too seriously, asking her mindkeeper friend G’Dala to tell her all about his sect. He says he can spare an hour, but they end up talking into the night.

There’s another woman we met last time, Marillon, who is given powers by Orall so she can track and dispose of Wake. We’ll see just how long that mission holds.

The most compelling sequence in the issue is when Wake must confront a teddy bear and other objects from other realms. She’s using a stop sign as a weapon, and it proves she’s able to pull objects out of dreams for her use. That convinces G’Dala she truly is the Veilwalker.

There are a great many other supporting characters, and what’s particularly impressive is that they are different from each other. I’ve often fussed at fantasy stories because the different “sides” are much like each other, different only in that they work for a different kingdom. I didn’t see any two people very similar to each other, and that helps make for good reading.

This book is “the calm before the storm” as people form alliances and prepare for the events ahead. The pacing didn’t feel any slower, even when there was some important exposition we need for the future. Liked that!

As I stated last time, It’s SO difficult to create art that matches a darker fantasy realm such as this one. If it’s too far out, we don’t buy into it; if it’s too “real,” we don’t understand it’s a dream.

Once again, both artist and colorist transport us into the story effortlessly. Action is illustrated well, and character emotions and expressions are also superbly portrayed. Both the artist and colorist do a great job of plunging us headfirst into the worlds of Vessels. I liked the teddy bear, and how he doesn’t remain like that for too long. Very strongly done!

I think my quibble last time about facial expressions is nearly erased this time. Although there still is less detail than I like, there’s enough to help me “get into” what people are feeling. Much better!

Vessels is kicking into high gear, and I think this issue will be one to remember as the story moves ahead! Lots of important things take place, and I’m sure we’ll come across their ramifications in upcoming issues.

Again I need to say that fantasy can be a tough genre to portray. Usually, there are no rules or guidelines about what’s going to take place, so anything goes. With Vessels, I can tell there’s a structure being put in place that will keep people like me happy while also pleasing fantasy fans. It’s fantasy for everyone, and I like it!

To get your copy of Vessels, go to the Card Shark Comics website, then to their online store which is ready to use whatever currency you have! I hope we see the next issue soon because it’s a book worth keeping up with, and then some!

Vessels is kicking into high gear, and I think this issue will be one to remember as the story moves ahead!