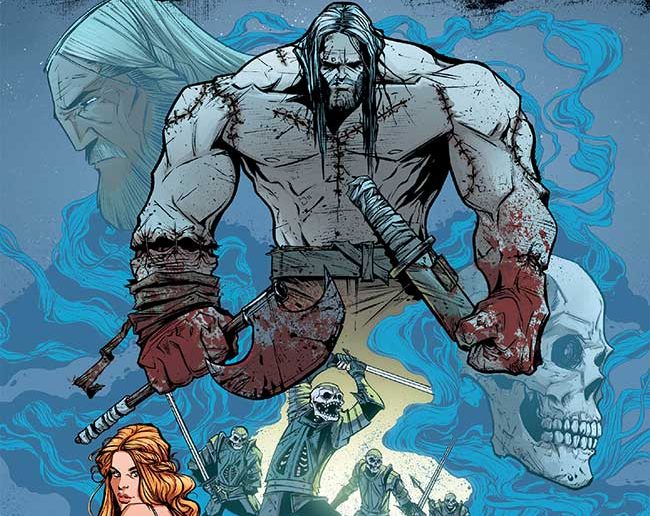 Our SQUARE ONE program offers the best of Oni Press with specially-priced $1 first issues. With these proven hits, there’s never been a better opportunity to introduce readers to their new favorite series! “Once the threshold of Helheim is crossed, not even gods can escape.” A hero named Rikard, raised as a draugr—an undead killing machine—is meant to be used as a weapon in the war between witches. But Rikard will not be controlled. And where the draugr treads, death follows. Callie Boudreau is rescued by a miracle cure in the form of heart transplant surgery, but the life she returns to doesn’t fit her anymore. As she balances what she has to do with what she wants to do, a mystery man shows up to teach her that instead of waiting for her new life, she should go out and steal it. The first issue from the Eisner Award-nominated epic series by Cullen Bunn (The Damned, Harrow County) and Brian Hurtt (The Damned)!

During the darkest days of the Civil War, wicked cutthroats came into possession of six pistols of otherworldly power. In time, the Sixth Gun, the most dangerous of the weapons, vanished. When the gun surfaces in the hands of an innocent girl named Becky Montcrief, dark forces reawaken. Vile men thought long dead set their sights on retrieving the gun and killing the girl. Only Drake Sinclair, a gunfighter with a shadowy past, stands in their way. Detroit police officer Jutte Shelley (aka Jutte Frankenstein) has brought her ambushed squad back from the dead, but they’re… different, now. After all, Jutte didn’t have a lot of material left to work with, and a human being has THE strangest puzzle pieces. Still, the team—Ex, Gemini, Leo, and Hadry—is back together again, and it’s time to figure out exactly WHO issued the order to have them murdered, and also… maybe get laid? Because for some of them, it’s been a while. As Umber’s guardians fall to assassins, the unwary citizens partake in the annual Festival of Utu, celebrating life, luck, and the bygone age of myths. But not for long. A new peacekeeping force chooses Utu’s Night to take charge, a force that will stop at nothing to establish control over the unruly city. And with Emerane gone, who’s to stop them? COVER B ILLUSTRATED BY SEAN DOVE

The killer virus has a name! Well, not really, but ZIM has the name of the guy who put the virus in GIR in the first place: VIROOZ. He also knows where he lives—Cyberflox, the galaxy’s largest technology flea market! It’ll take all of ZIM’s cunning, intelligence, and subtlety to infiltrate the planet and find VIROOZ, which means ZIM is probably going to fail. Badly. Part three of a four-part story! COVER B ILLUSTRATED BY MIKE VASQUEZ

The Smith family finally gets to spend some quality time together… until an alien abduction brings feelings to the forefront. Plus, Morty and Jerry explore the intricacies of consciousness in a new backup comic written by Magdalene Visaggio (Kim & Kim)!

COVER B ILLUSTRATED BY MARI COSTA

CAPTURED ONCE MORE! Morty is back in Rick’s clutches… but could he be an ally in the fight against the Council of Ricks? Maybe! Or maybe he just wants to see Morty fight a bunch of other Mortys on the way. We’ll find out! When the mob is run by demons, the double-cross is part of day-to-day life. But who’s double-crossing who? Is Pauly Bones betraying Eddie? Or is Eddie planting a knife between Pauly’s shoulder blades? Either way, somebody is getting their soul back… and somebody’s ending up in the morgue. All’s fair in love and war, especially as far as Callie is concerned. Tired of playing nice and doing the right thing, she’s giving in to Mercer’s way of doing business and it puts her former gang directly in her Canadian crime wave’s crosshairs. Before the intervention is over, Callie will have to choose between her friends, her lover, or herself. The Creature from Devil’s Creek has finally turned state’s evidence against his tormentor, the mountainous leader of the Cryptids. It seems as if his arrest is about to mark the decline of the gang, but a certain tattooed cryptid supremacist stokes their dormant belief in SPEFIWA— Species Final War—and the whole prison waits for the final match that will ignite the unstable nuclear pile. Also: Geosurgery! Unlikely reality checks! And… a rap musical about our founding fathers? The zombie apocalypse keeps on keeping on. Our heroes have escaped the clutches of the terrifying and psychopathic Officer Friendly but is he hot on their tails? You bet he is! And hiding in that mall isn’t going to do the trick.

Part three of the exciting adaptation of the popular Plaid Hat board game continues with all the zombies, explosions, drunk mall santas, terrifying situations, and a sweet precious dog that always saves the day. Also, Sparky gets a samurai sword! Cleo Lovedrop has been going out with Myrtle, the girl who left her roses, who wrote her a song, and who took care of her black eye. But lately, Cleo’s been seeing a different side of Myrtle: jealous, aggressive, manipulative… and scary. And with everything else going on—Cleo’s roommate being attacked, Audrey breaking up with Beth, Trilby being distant—Cleo just isn’t sure she can deal with it anymore… The critically-acclaimed and Eisner Award-winning Whiteout graphic novels from Greg Rucka (Lazarus, Wonder Woman) and Steve Lieber (The Fix, Superior Foes Of Spider-Man) return in this new compendium! Carrie Stetko is a US Marshal tasked with enforcing the law in one of the most remote and inhospitable places on earth—Antarctica. Collects Whiteout and Whiteout: Melt under one cover!