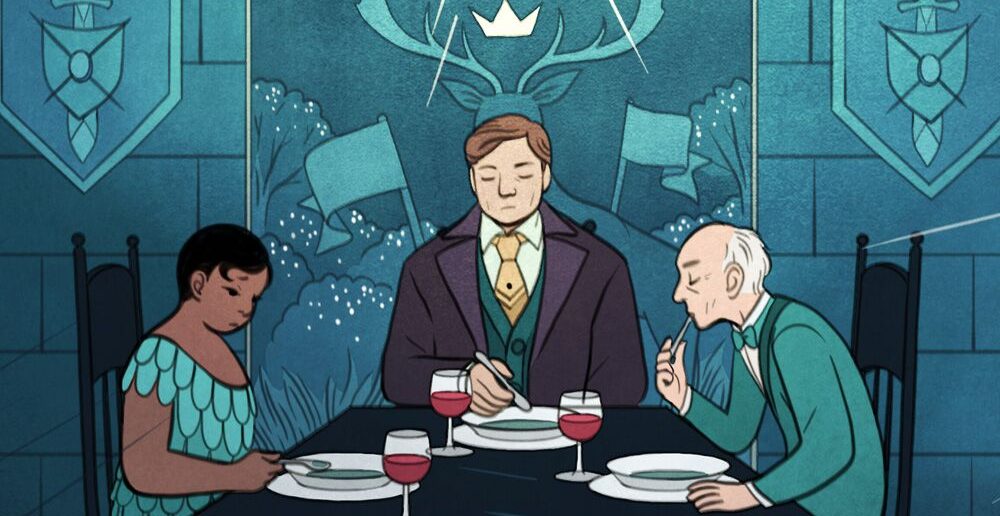 Searle is returning to a working partnership with Bedside Press (The Secret Loves of Geek Girls, Fashion in Action, Window Horses), as one of the headliners of  Gothic Tales of Haunted Love: A Comics Anthology working on the story: Ladies of the Lake.

Major Spoilers caught up with Searle to talk about working on Gothic Tales of Haunted Love.

MAJOR SPOILERS: Let’s start out really easy: how did you come to be involved in Gothic Tales of Haunted Love? SARAH WINIFRED SEARLE: Hope put out a quiet call to people she already knew/had worked with for submissions early in the game. I’ve had this short story on the back burner for years, so the pitch pretty much wrote itself.

MS: One of your pieces featured on the Kickstarter campaign is called “Ladies of the Lake” – is the allusion to the King Arthur mythology a coincidence or does the title tell us more about the story than at first glance?

SWS: I don’t want to spoil too much, but: yes! It’s sort of an Arthurian-themed Bluebeard retelling, but maybe not in the way you’d expect. It’s been cathartic to take this fairytale and use familiar bones to craft something that’ll hopefully be meaningful to readers in new ways.

MS: You’ve worked on romance stories in the past, including contributing to Secret Loves of Geek Girls what have you learned from your past works that you’ve carried over into your work on Gothic Tales of Haunted Love? SWS: I’ve done tons of romance and short stories for all sorts of anthologies and publishers, so at this point my process is a well-oiled machine. One of my main long-form projects right now is Sparks, an erotic Edwardian romance about two women who fall in love while working in service, and while it’s incredibly fun, it’s also very realistic. While “Ladies of the Lake” is loosely inspired by what living in a remote castle in 1920s Wales might be like, I’m allowing myself to get a bit more fantastical and draw my dream spooky castle instead of using references more carefully. This story is like a nice little self-indulgent treat in that way, I love being able to stylize it a bit.

MS: Do you have an affinity for gothic stories or any particular influences for this piece?

SWS: Fans of Tennyson’s Idylls of the King will spot some references (not gothic in itself, but might feel spooky in the way it’s used), and the leading lady Gwyn’s favorite book is Northanger Abbey. I enjoy playing with the reference to the latter, it hints at self-awareness in a way that adds humor to an otherwise dark tale. I’m a quiet literature nerd and it’s fun to have this outlet for that.

MS: Were there any particular challenges you faced with “Ladies of the Lake”? Or something you learned about yourself telling this story?

SWS: I’m known more for sweet, warm types of stories, so this one’s a bit of a departure as it embraces levels of darkness I usually avoid. I think I managed to do dark without it becoming a bummer, though, and I hope my audience is open to trying something a bit different. I’m also secretly a gritty fantasy lover, so maybe this will be just one of a few stories I’ll make in that direction.

MS: What advice would you give to young creators looking to break in?

SWS: I spent way too long stuck on planning –– character designs, outlines, redrawing the first ten pages over and over –– and I didn’t get anywhere until I just started actually making comics. Scripting, drawing, putting them out there for people to read. Just do it, don’t wait, even if you’re worried you’re not good enough yet. You’ll never improve unless you’re actually making comics, and even if you don’t have editors knocking down your door yet, you’ll meet peers who will rise alongside you. Those friendships can end up making a tremendous difference over the years.