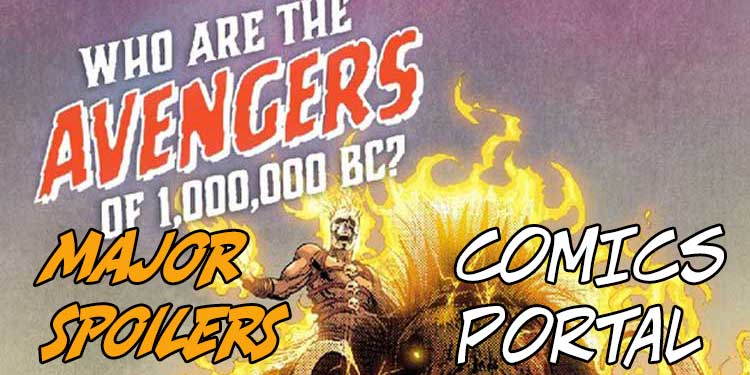 Sometimes it’s a real disadvantage having read comics for as long as I have. You live to see things come back in one form or another.

The latest news from the House of Ideas has been their 1,000,000 BC Avengers, which you can find out more about at this link. Here’s a brief description: “MARVEL LEGACY #1 introduces the AVENGERS OF 1,000,000 BC – and that’s only the opening of the most important comic story of the year!” And more: “Mysteries! Returns! Infinite Possibilities!”

The group contains Ghost Rider, Odin, Phoenix, Iron Fist and Agamotto, among others.

I READ SOMETHING LIKE THIS ONCE, BUT IN THE OTHER DIRECTION! I know, I know – nothing is completely original these days. But this storyline reminded me of something I read about 20 years ago. Yes, it was called DC One Million. Now, it went in the other direction – to the future – but that “One Million” part has stuck with me all that time. And the common notion is that comics fans turn over every three years or so, something Marvel may be counting on. I mean, both companies turned their heroes into apes at one point or another!

I liked that DC event, am curious about this “new” one from Marvel.

One element I really enjoyed in DC’s take was that the Justice League would re-form every so often over the centuries into its “classic” line-up, and the one they focused on was in 1,000,000 AD. There were other re-gatherings over time, but this one did some interesting things with that group that couldn’t be done today.

Will Marvel follow that same premise? I doubt it, but again, it lets you tinker with the characters in ways you can’t make happen in today’s comics, which need to come back in pretty much the same format month to month.

IS IT A GIMMICK? I have some online friends already declaring 1,000,000 BC Avengers a “gimmick” – something that will sell books briefly, but will fade out just as fast.

I always tell them that events like this, and they do happen more often these days than in the past, seems to me, are there to fill the gaps. You know, Bruce Wayne needs a break from the cape and cowl, so Dick Grayson steps in. Or Steve Rogers appears to be dead to give someone else a chance to be Captain America.

A few years back, Batman hopscotched through time, finally ending up in the present as “our” Batman. I’m sure you can name plenty of others.

What makes the difference is how well the story is told. Did we enjoy it? Did they do things fans often clamor for and show us how they would or wouldn’t work?

In this story, it seems like they might be setting up the “old versus new” versions of characters as they duke it out. You know, the spirits of the heroes live on through time. Now they need to battle it out to see who continues to be in that identity.

My money is on the “old” ones rather than the “new” takes. After all, they sold boatloads of comics literally for decades. The “new” versions haven’t proven they’ve got what it takes … yet, in my opinion.

DON’T READ THE ‘PREVIEWS’ IF YOU WANT TO BE SURPRISED Another “bad” habit I have is reading Diamond Comics Previews volume, what I often call the “phone book” due to its size, as well as Marvel’s own version. They must solicit books two months in advance so stores and faithful comics buyers can order what they will want to buy. Otherwise, stores have to guess rather than have customers tell them what they will get. Of course, the shops still have to fill out their numbers based on what they think other folks will buy, but it gives them a good start.

For instance, one of the current Captain Americas is no longer in that identity and has moved to a different alter ego. I won’t say which one, but let’s say it’s one that hasn’t been around very long. He even has a new number one issue out with this identity. Let’s just say I’m happy with that choice and move on, okay?

And there are other clues as to who the “Avengers Two Months From Now” will be in the near future. I mean, I need to know so I can decide what to get, but if you like to be surprised, I highly recommend you hold off … at least, for now.

DON’T GET ME WRONG, IT LOOKS INTERESTING

I know I tend to fuss with Marvel more than I do DC. As I’ve stated before, my favorite Marvel heroes are the “C” and “D” level folks, like the Black Knight or Stingray. If they rose up in the ranks, I’d be thrilled. But I don’t see that happening anytime soon. Batman, on the other hand …

I find the choice of characters involved intriguing, such as Ghost Rider on the back of a mastodon, and Odin holding Thor’s hammer. We’ll hopefully learn a few things about Agamotto that we didn’t know before, for example. If they can plant story seeds that can be harvested in the future, excellent! I just don’t want them to be throwaways, though.

What do you think about 1,000,000 Avengers BC? Looking forward to it? Thinking it’s just another gimmick, a not-so-original idea from the House of Ideas? Whatever your opinions, be sure to share them in the space below!