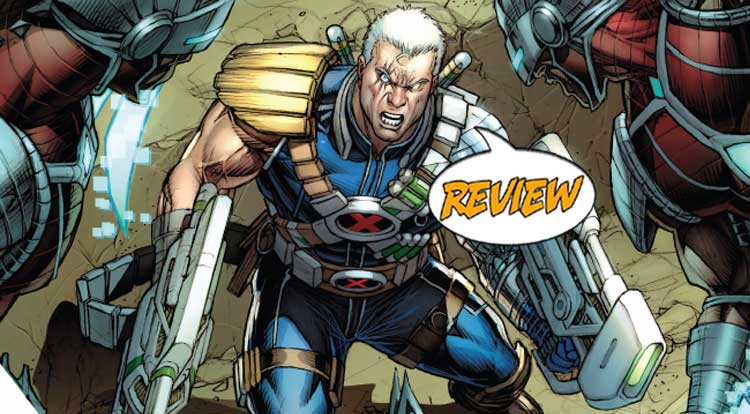 Cable and Conquest are traveling through time, trying to assemble the legendary Time Sword.  Unfortunately, Cable is trailing far behind…  Your Major Spoilers review of Cable #3 awaits! Previously in Cable: “Pursuing a villain through the time stream, Cable followed the trail to the Old West and then to feudal Japan, both times coming face-to-face with a group of natives wielding decidedly futuristic weaponry.  determined to stop this disruption of time, Cable found the next jump point in hopes of closing the gap between him and his foe…”

As the issue opens, Cable arrives in the year 1121, at a Mayan temple, where he meets Kagan, a temple priest.  After disposing of a few flying troublemakers (who may be wearing technology far beyond what we expect, but the story isn’t entirely clear about that fact), Kagan and Cable make their way into the temple.  Kagan knows all about Cable, his quest and his foe, Conquest, even showing the mutant the exact configuration of the legendary time-sword and it’s components.  (This is lampshaded as something that might be important later, with Cable mentioning that Kagan can help him out.)  Cable makes his way to the top of a ziggurat, then time slides away, landing in Moscow circa 1908…

….moments before getting laid out by Conquest.

SOME CREATIVE LAYOUTS, NOT ALL SUCCESSFUL…

There are some really creative visual moments in this issue, including Kagan’s holographic calendar, but there are a couple that fall entirely flat.  A full-page layout of Cable climbing up a ziggurat fails because it reads bottom-to-top, while several other moments are beautiful, but the blocking of action doesn’t really make sense.  (The final page attack by Conquest, f’rinstance, doesn’t track for me.)  Still, this issue features a well-drawn Cable, and one whose weapons all feel realistic in ways that they sometimes don’t.  The biggest issue, though, is in the pacing, with the bulk of the issue consisting of a stop-and-explain sequence from Kagan, followed by a battle sequence that feels a bit hurried and ending with a shocking cliffhanger that just doesn’t really work.  Cable’s mission seems very remote and hard to conceptualize and we don’t really get into his head enough to make things seem like an indy ploy or idiosyncratic plan, so feels like he spends the issue outmaneuvered and flailing.

In short, as a middle chapter, this may work, but as a stand-alone comic book, the combined problems of script and storytelling make it unsatisfying.  Cable #3 has some pretty great character interactions between time-traveler and Mayan priest, but just feels somehow off, and too many sequences require rereading for visual clarity or plotting reasons, leading to 2.5 out of 5 stars overall.  I’d be interested to read this entire arc collected and see if this chapter works better in that form, though…

I enjoy the dialogue, but the pacing feels really off and several visual sequences don't quite work as drawn...