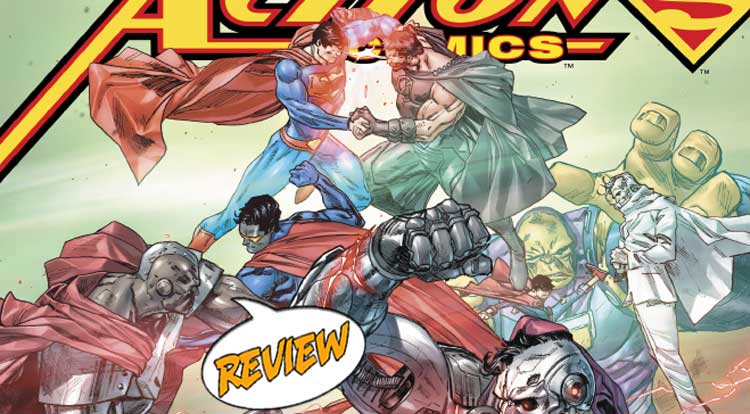 Superman and his allies are trapped in the Phantom Zone.  Zod has taken the Fortress.  Seems like all is lost… but where is Jon Kent?  Your Major Spoilers review of Action Comics #984 awaits! Previously in Action Comics: “A battle of titanic proportions rages through Superman’s arctic fortress as General Zod reveals his ultimate plan by accessing the Phantom Zone.  Superman’s family’s lives hang in the balance as “Revenge” concludes!”

THE ARMIES OF KRYPTON

We begin with Superman’s allies (sans Supergirl) trapped in the zone, along with The Eradicator and Cyborg Superman.  Zod forces his telepath, Blanque, to bridge the gap into the Zone, while betraying both Mongul and Metallo, throwing them bodily out of the Fortress of Solitude.  As for Superman, he has been healed of his Black Vault-induced blindness by the strange energies of the Phantom Zone, but also realizes that Zod’s plan doesn’t make sense.  He, Luthor, Superwoman, Steel and New Super-Man engage the Eradicator and Cyborg in battle, then the other shoe drops:  Zod didn’t send his allies into exile by mistake, but with a specific mission: Find his wife Ursa and their son, Lor-Zod, and bring them back to Earth!  Jon Kent manages to use Superman’s Kryptonian battle suit to distract Zod, but Ursa, Superman and Eradictor make their way out of the Zone just in time.  Injured by Krypto, Zod takes his leave, but the balance of power has shifted once again…

From a story-telling perspective, I understand the desire to have the entire Superman Family in play here, but Jon, Kenan, Lex, Lana, John-Henry and Kara make for far too many heroes to keep track of, with an equal (albeit dwindling) number of villains.  There’s a “by-the-numbers” feel to the plot, feeling like it’s checking off each villain (Mongul in space, Metallo out the window, Cyborg Superman stuck in the Zone), giving us a tiny bit of Mister Oz, but most of all making the new status quo a head-to-head issue between the El and Zod families.  Patch Zircher’s art makes up for a lot of the plotting idiosyncrasies for me, though, delivering some truly impressive moments (such as Supergirl’s strike at Zod, a beautiful page, or the animal rage of Krypto’s snarl) throughout the issue.  ‘Revenge’ ends up being a story that does a lot of housekeeping, moving the pieces on the board to set up what comes next, which unfortunately makes the end of the issue feel rushed and anticlimactic…

In a nutshell, the sheer number of characters, events and bits of business in these pages make it feel like it would be better served as two issues, or perhaps as the same story with fewer characters in play (even though that’s not how Jurgens does things.)  Action Comics #984 is still an above-average read, though, with some lovely art throughout, progressing the plotlines in interesting ways and once again reminding everyone that Mister Oz is out there someplace, earning a better-than-average 3 out of 5 stars overall.  In some ways, I’m happier with a comic that tries too much than one that feels safe or boring…

Well-drawn, but feels quite anticlimactic. Zod's new status quo is interesting, however...