[Giveaway] You may win a Valerian: City of Alpha Limited Edition Mousepad

Europacorp, Luc Besson’s film studio, has selected Spil Games to create the official mobile and web game for Valerian and the City of a Thousand Planets, . The game is available on IOS and Android devices right now.

The mobile game begins 590 years earlier when Alpha is still just a space station. The aim is to explore and discover the aliens and planets that will come to be featured in the movie. Players must complete exciting missions, connect with alien species and come up with strategies to help them create the knowledge-sharing metropolis. The ultimate objective is building for themselves the biggest and best version of the City of Alpha.

“It’s no longer enough to make a game that just mimics the movie. Yes, players want to dig further into the story but the game also has to be cool and fun to play in its own right. The producers of the New Hollywood understand that a game which captivates its audience can massively amplify a movie brand.”

With the release of the game and the movie, Major Spoilers is giving away a limited edition mousepad. 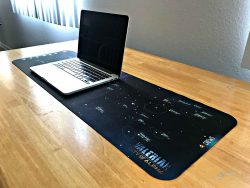